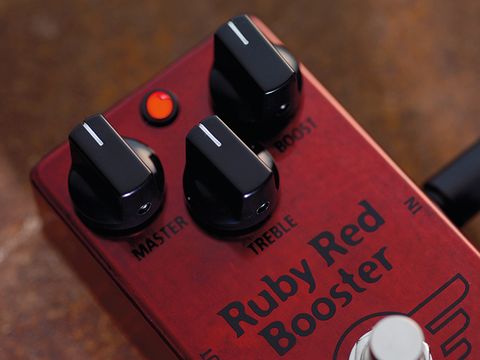 This isn't just another stompbox. Mad Professor has put a lot of thought into its function and tone. Thanks to its more affordable price, even more of us can feel the love.

You may remember that we've previously had a look at a couple of Mad Professor effects pedals: the Mellow Yellow Tremelo and the Fire Red Fuzz.

Suitably impressed, we raved about the features and, but choked a little at price tags that started from. They were hand-wired, but still…

Well aware that the only grumbles is has received regarding its pedals were sparked by the prices, the Finnish company is now offering a number of its stompboxes in a PCB (printed circuit board) format, with the pots, switch and jack sockets mounted on the board.

The use of PCBs has brought the price of the pedals down by a fair margin. That's great, but has tweaking the spec impacted on the brand's hard-earned reputation for great tone?

The Ruby Red Booster is, you got it, a booster pedal. It's not just a clever name. That said, the Ruby Red can be used as a regular booster, a treble booster and even as an overdrive pedal. Which is groovy, but that's not all it can do.

You can also use the pedal as a buffer to prevent treble and volume loss when you have a whole shop's worth of gear on your pedalboard, or ridiculously long Albert Collins-style cables.

The buffer is activated by a switch inside the pedal that offers a choice between 'true bypass' or 'buffer on' in bypass mode.

The Ruby Red has three controls: master, boost and treble. Like other Mad Professor pedals, its components are protected by a tough metal case and access to the battery involves removing four screws. Awkward.

We test the Ruby Red's mettle by putting it through a small valve-powered stack, which doesn't exactly have the most satisfying clean and overdriven tones around - can the Ruby Red help?

Deciding to go a bit old school, we add a touch of gain on the amp and use the Ruby Red to boost the signal. The difference is incredible, with organic and harmonically rich overdrive flowing from the amp's speaker cabinet.

Mad Professor will still make you a hand-wired version of all these pedals if you wish. The thing is, based on the quality of the sounds on offer from these lower-cost factory models, we don't think you need to splash out all that extra lolly.

We'd be surprised if many people could really hear the difference between the hand-wired and circuit board jobs anyway. Utilising a PCB construction hasn't diluted any of the wow factor that you equate with Mad Professor pedals.