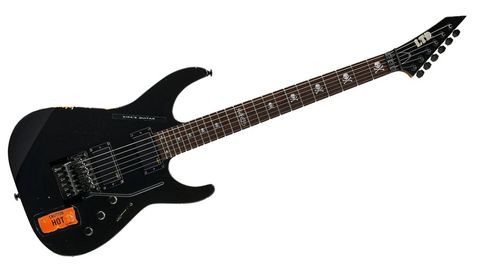 The KH-25 emulates 'Tallica well, but those looking for a more flexible metal axe should probably look elsewhere.

ESP and Metallica's Kirk Hammett go way back. Hammett was on tour in Europe, around 1986, when Anthrax main man Scott Ian - now, ironically, a Jackson endorsee - showed him a Strat-style guitar with comic-book graphics that not only looked cool but played great, too. ESP was blessed with the foresight to offer Hammett a factory tour and let him spec a guitar that would be his mainstay for the next 25 years.

Metallica's designated shredder has had countless models assembled in his honour. But to mark his silver anniversary as ESP's celebrity point man, the Japanese company has issued a limited-run Hammett signature model under its blue-collar handle LTD and called it the KH-25.

Based on the ESP KH-2 Vintage, the KH-25 has the look down pat, bar the name on the headstock, but has a downgraded spec and Vietnamese construction to keep it affordable.

Straight out of the box, the KH-25 is a convincing doppelganger. The black-on-black distressed finish is faithful to the original, the skull and crossbones inlays instantly recognisable. Name and logo aside, the reverse headstock and nicotine lacquer finish on the neck will convince you that you've recently been accepted into the wealthy one per cent of Metallica fans.

But make no mistake, the KH-25's aesthetic authenticity comes at price. The thick black gloss finish all scarred up to look road-weary, the stickers, too... There's no way round it, the KH-25 is not the prettiest guitar on the shelf. But then it's all, uh, in the eye of the beholder: you want this to buy into Kirk's world, right? Besides, those off-the-shelf dings and scrapes free you up to play it hard.

The KH-25 feels rigorous enough. A thin U-shape-profiled neck is bolted to a solid alder body, leaving a clunky heel to encumber access to the upper frets, but the KH-25 is built to last and, moreover, to play.

Anyone playing rock and metal should get some joy from the KH-25, and also will be surprised that ESP's active ALH-200 humbuckers do a passable impression of the EMGs ordinarily fitted on Hammett's guitar. They'll embellish your Metalli-riffs with plenty of gain, with the bridge pickup particularly generous with its harmonic response.

The neck pickup offers some great Sabbath/Iommi rhythm tones, with a warmth belying the active 'buckers, which occasionally can lack subtlety.

The cleans are passable, if lacking character - the neck and middle positions work well for precise, picked arpeggios. And the Floyd Rose Special vibrato unit is stable enough to keep itself sane for all but the most extreme whammy abuse.

But does it play well enough and sound good enough to satisfy fans and convert others? Almost. For a similar price, you could get a Jackson Dinky with a set of EMGs (81/85), and it's stiff competition like this that may convince you to step out of Hammett's shadow and be your own player.