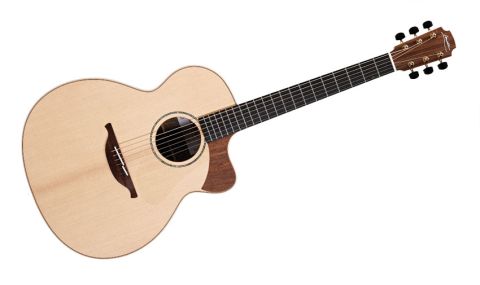 A reminder of Lowden's original vision updated for the percussive player. You might not be Thomas Leeb but here's the tool you need.

Lowden's founder and namesake George Lowden has been making guitars for over 50 years. His latest effort sees him team up with percussive acoustic virtuoso Thomas Leeb on a unique signature model.

George Lowden built his first guitar back in 1961. It's a handy pub quiz fact, but it also illustrates the huge experience of perhaps the UK's best known luthier whose instruments are, and have been, played by a dizzying cast of revered pickers.

As we reach the mid-point of 2013, Lowden builds signature models for Richard Thompson, Alex De Grassi, Pierre Bensusan and Thomas Leeb, for example, all of whom do things with the ol' flat-top that entertain and astound in equal measure.

Despite a rocky past business-wise, Lowden has been a family owned business based in Downpatrick, Northern Ireland since 2004, and is now very much back where it should be: at the top of the Brit-making pile.

Here we take a look at the most affordable Lowden signature model, courtesy of Thomas Leeb.

With its high waist, this O-size cutaway body has a clear family resemblance - it was this design that put Lowden on the map, with its spacious lower bouts giving it a virtually jumbo-like bulk. But it's not just the apparent size, the depth is considerable and despite the same curved taper to the sides, at its thinnest point at the heel it's still thicker than the 32SE at its deepest by a few millimetres.

Sitka spruce is used for the top wood: a slightly dark colouration follows the centre join, which gives to our eyes an added character, though you may prefer a 'cleaner' top. A primary difference between the Leeb and a regular acoustic, of course, is the walnut 'scratchplate' that sits on the face by the gently upward sloping Venetian cutaway - all part of Leeb's percussion technique. Unusual?

"Well, yes, in a way," laughs the man himself, when we speak. "But Thomas really does use it and anyone playing in that percussive style will find it useful. If you don't have it there you're going to damage the soundboard; it gives you a place you can scratch and tap and create a sort of snare drum effect without damaging the guitar's soundboard."

The necks are broadly similar in profile, although here we have Lowden's standard nut width and the heel is tapered and pointed, a more classical style compared with the straight-sided, rounded heel of the 32SE.

We get a walnut head facing, a deep coloured rosewood bridge and no markers on the face of the ebony 'board (which is bound with ebony), just clear side dots from the 3rd to 19th frets.

The Leeb is markedly different to many modern acoustics, with a substantially enhanced low end. Dropping down to open D and DADGAD, we're into more Celtic-like tonality. Yet its wider sound is well balanced and certainly the low end doesn't run away with you.

There's a breathy character, a clarity, but there's also a hint of 'dirt' if you like. We feel we have to dig in a touch, too; it's the choice for a more experienced player and a guitar that will only get better the more it's played.

Of course, if you're into Leeb's percussive style you'll get the scratchplate, and with a large soundbox like this, it's virtually a cajón with strings attached.

The Thomas Leeb might be a specifically aimed instrument but remains essentially George Lowden's original vision: a wide-sounding, 'Celtic' voiced guitar that simply adores dropped tunings and percussive styles. A guitar that awaits your performance and songs.