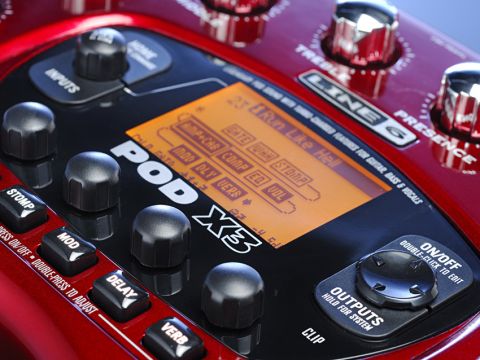 Ten years on from its inception, this is the best version of the bean-shaped amp modeller by a long way.

The POD X3 represents the latest stage in POD evolution that started in 1998 when the original burst into our stores. The bean-shaped POD X3 is spanglier than its predecessors, finished in a shade close to candy apple red and sporting chrome knobs.

So, what's changed from the previous PODxt versions? Well, for starters you now get almost double the number of guitar amps - up to 78 from 42. There are 24 guitar cabs, 98 stompbox and studio effects and you also now get facilities for bass and vocals with 28 bass amps, 22 bass cabs and six vocal preamps.

Other changes include a larger LCD and a different (expanded) set of controls. But the most significant difference is in the routing options, in that there's a Dual mode where the signal can now be split through two different amp and effect chains simultaneously (Tone 1 and Tone 2).

This means that you can send a single instrument through both paths or, alternatively, dual inputs can be used to individually process two instruments at the same time - guitar and mic connections are provided.

Computer integration has also been upgraded: the USB 1.0 connection of the previous generation has been superseded by USB 2.0, which supports more audio channels between POD and computer. Also new is a stereo S/PDIF digital connection.

The USB 2.0 connection allows the X3 to be used as an audio interface. It opens up a variety of recording options by giving you eight channels to send audio from the POD to a computer and a stereo return to the POD for monitoring.

If you set up the appropriate recording tracks on your computer's recording software you can record the lot simultaneously, leaving plenty of options available as to what to use in the final mix - the stuff recorded from seven and eight being useful raw sounds to which you may wish to re-amp, or apply some other plug-ins such as Line 6's own GearBox selections.

The X3 hardware display improves on previous models. The front page shows the Tone 1 or Tone 2 signal path clearly, while the editing pages each show a few parameters that can be adjusted by a row of four rotary 'soft' knobs directly underneath. A four-way cursor facilitates scrolling through the pages.

These new controls are necessary because of the increased complexity of POD functions and, although it can seem a little frustrating at first, with a little familiarity it soon becomes apparent that Line 6 has actually put a practical system together that gets quick results with a minimum of fuss.

Since PODxt came out, Line 6 has been refining its GearBox software and it's from this source that the X3 gets its new set of models by incorporating everything found in the GearBox Plug-In Gold bundle.

As far as guitar amps go this includes plenty from all the usual mainstream manufacturers, a few names that are seen less often like Gretsch, Supro and Diezel, plus a whole bunch of Line 6's own concoctions - some hybrid mixes of familiar models. There is a full range of accompanying cabs, all with adjustable mic'ing options from several virtual microphones.

The new X3 version of the POD is designed for both guitar and bass players so bassists no longer have to buy a specialised POD. A classic selection of modelled bass amps is available including Ampeg and SWR among others, and there are plenty of cabinet options. If you wish to plug a mic in, there are models of Neve, API and Avalon preamps to tailor the sound to exact requirements.

Of course, more models means more versatility and a greater scope for creating sounds that are just right for the job in hand, but the creative potential gets its biggest boost from the fact that you can now combine the Tone 1 and Tone 2 signal paths to create new sound blends.

Each signal path is made up of a series of blocks - Gate, Wah, Stomp, Amp & Cab, Compression, EQ, Volume, Modulation, Delay and Reverb - that can be switched on or off.

With a dual signal path, Tone 1 and Tone 2 could have a completely different model in one or more of their equivalent blocks. Or perhaps the same model but with different settings, say, a Fender amp running fairly clean and one that has more drive to create a sound that has sustain but with extra attack at the start of the note.

This blending facility obviously allows for many possible combinations of all the available amps and effects to create new sounds, but the dual routing does not have to be used to create one hybrid blended sound as there are plenty of panning options for signal paths.

With Tone 1 and Tone 2 panned to opposite sides of a stereo output you could create the sound of playing through a pair of AC30s perhaps, or a tweed Bassman and blackface Deluxe at the same time, or one amp with reverb and one completely dry.

The possibility of sending different sounds to separate outputs opens up possibilities in recording via the physical outputs if you are not in a position to take advantage of the separate routings offered over USB, but it also has implications for creating a stereo rig for live work should you wish to use a pair of power amps or go straight into the PA.

It's probably fair to say, though, that most onstage POD users feed a mono output to a standard guitar amp. The X3 is set up for this, in that it can be switched to a 'Live' mode which ensures there is no speaker, mic and room simulation at the output. It also offers tonal shaping options for altering bass, mid-range and treble content to best complement your amp's natural voicing.

No one would expect Line 6 to take a retrograde step so it will come as no surprise that this unit offers big improvements in versatility over its predecessors and, as such, now has a more universal appeal.

We have yet to meet a guitarist who claims that a modelled POD patch in isolation sounds as good as the real valve amp mic'd up with a quality mic in an acoustically sound room. That said, there are plenty who will attest that the POD sounds can get pretty close and that they can certainly do the job once mixed into a recorded track.

What you are buying into with POD is extreme convenience and ease of setting up when it comes to recording, plus a whole library of sounds that can reasonably authentically replicate the sort of amp and effects collection that you could only ever own in your wildest dreams.

So, if you are looking for a convenient way to record guitar with access to myriad tones and would prefer to use hardware rather than software plug-ins, the POD X3 is ideal.