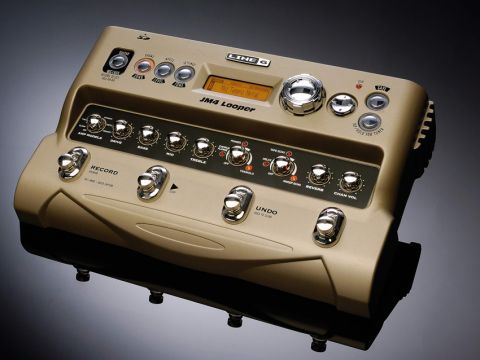 Once the habitat of leftfield noodlers, the looper pedal has gone very mainstream over the past few years, with all the big FX companies - Roland/ BOSS, DigiTech, Line 6 etc - producing ever more capable units. The concept is simple enough: the looper enables you to capture a chord progression or riff and loop it endlessly while you overdub on top.

Obviously the JM4 does this, but it also does a lot more besides. For starters we get 100 plus songs and drum tracks - proper recordings by some very capable musicians as featured on the Spider Jam.

Select which of these you want, select your tempo/key (you have a choice or timestretch/ pitchshift or varispeed) and add your own guitar parts, vocals, or - via the aux input - any other electrified instrument. Once done you can save your masterpiece to either the internal memory or SD card, allowing you to export the recording into your computer either for storage or as the basis for a new song idea.

About 25 per cent larger than Line 6's stompbox modelling FX, the JM4 feels rugged and looks good with all the connects placed on the top side. While early loopers just dealt with the manipulation of the input source, the JM4 comes loaded with 12 Line 6 amp models from clean to 'insane', seven 'smart control' effects and reverb.

While the amp models have extensive controls, the FX are limited to depth/speed level, while the delays and echoes add tap tempo, not via a footswitch but by a push button that also engages the tuner, which is displayed in the small, but acceptably bright, LCD window.

You also get effects for the mic/ aux input, independent of those used for your guitar.

Although the JM4 has extensive knobs and footswitches it's well laid out and easy enough to use, although you will need to study the manual. The top portion handles 'housekeeping' tasks like input selection, drum and song selections and the many settings/ level controls.

A typically clever feature is the ability to set output levels of the song/drum track, guitar track and mic/aux track as well as setting the relative level of the overdubbed guitar - important if you're using the JM4 for sound-on-sound loop creation.

You can save up to 100 'CD- quality' recorded jams (a total 24 minutes of recording time, says Line 6) to the internal memory. Or with a 2GB max SD card, you can apparently save 6.5 hours of recorded jams.

Initially you can get to grips with the JM4 simply with headphones then think about any amplification. You can, for example, run everything into a PA or the song/drum tracks into a PA (or hi-fi) and the guitar tones directly to your amp.

It's very flexible and with a clean acoustic amp, for example, we certainly got great results: the drum/song tracks are really punchy, the guitar tones varied and characterful.

Many of the artist presets are great places to start and are more than adequate for serious practice and there are numerous tones here that are of easily of recordable quality, especially with the frankly excellent onboard effects.

With just a set of headphones, a guitar, a lead and the JM4 you have the ultimate practice/loop station: take it anywhere, study, create. The quality backing/drum tracks, the excellent onboard guitar sounds and sensible outing routing means that cranked up through a PA and/or your guitar amp you can easily perform with it.

Practice just got a whole lot more fun - and this could well be the best £257 you ever spend.