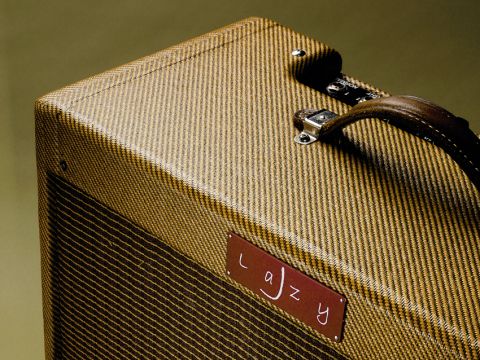 Beyond being just another Tweed replica, the Lazy J's price makes it excellent value.

Fender's Tweed Deluxe amplifier is one of the most widely copied and emulated designs in the world. This is partly because it's relatively simple and therefore a good choice for first-time kit builders, but also because a good Deluxe sounds fantastic.

So how do you make a good Deluxe sound even better? Well, one person who might have figured this out is Jesse Hoff, otherwise known as Lazy J Projects. Hailing from South Carolina but now living in the UK, Jesse's skills are already in high demand and he's currently the resident amp doctor at one of the country's top guitar stores.

The Model 20 is Lazy J's current entry-level design and, while it looks like a regular Tweed Deluxe, this amp has a few secrets hidden behind the control panel.

From the front at least, the Model 20 is a well-made and nicely presented copy of an early fifties Tweed Deluxe amplifier. The cabinet is handmade from finger-jointed pine - just like the originals - and covered in thick tweed, brushed with a dark brown lacquer.

The Model 20's chassis is a solid steel affair with a chrome panel and white lettering for the controls. Spinal Tap fans should note that true Tweed amps go all the way up to 12 - yep, one more than even 11.

Around the back, some of the things that make the Model 20 special are rather more obvious. Instead of 6V6 output valves, there's a pair of beefier 6L6s.

The loudspeaker is Celestion's Alnico Blue - one of just a few loudspeakers that Celestion still produces in the UK and an altogether different animal to the Jensens with which Tweed amps are typically kitted out.

There's also something else Tweed amps normally don't include - an Accutronics spring reverb. This optional extra is powered by a separate module mounted on the side-wall of the cabinet, with two more 12AX7 valves and controls for reverb level and tone.

The Model 20's electronics are strictly old school, with not a trace of silicon anywhere inside the chassis. All the small components are mounted on an eyelet board, which is a piece of insulating material with small brass rivets pressed into it at strategic positions.

Resistors and capacitors are soldered in to the appropriate rivets with wires leading to the valve sockets, transformers and front and rear panel connections. This is the traditional American way of building a guitar amplifier and Hoff's choice and positioning of components suggests that he knows all about it.

There's a mixture of old and new - modern carbon film resistors sit alongside Sprague Atom filter caps - and everything's connected with cloth-covered hook-up wire, which ensures the Model 20 will smell as vintage as it looks.

The standard of wiring and soldering is as good as the best we've seen and the overall impression is one of solid reliability that'll take the abuse of professional touring and keep on working regardless.

The Model 20's controls are as easy to use as anyone could want, but in this modern age it's perhaps worth explaining how they work. There are two channels labelled Bright and Normal and each has two input jacks.

There is, however, no footswitch. Both channels are on all the time. You plug into either channel and alter the channel volume and master tone controls to suit.

A popular trick to gain a little more drive and tonal flexibility with this kind of layout is to use a short patch lead to 'jumper' the channels together. This means you can mix both channels to taste, effectively turning the volume controls into tone controls as well.

It works best on amps where the individual channels are voiced to be very different. On the Model 20 there isn't as much variety - the Bright channel is brighter, the Normal channel darker - so jumpering is still possible, but not essential.

"It's worth mentioning that even without jumpering, the volume controls are interactive," Jesse tells us. "So when you're plugged in to the Bright channel, the Normal channel volume has a subtle effect on the response of the amp."

"Turning it up to about halfway will loosen up the lower mids, turning it up further to about 10 tightens the bottom-end up, beyond that the sound becomes compressed and choked."

While this is subtle, it's definitely audible and adds to the amp's character.

Another small but important change is the function attached to the ground switch. Thankfully the Model 20 is properly grounded, so the switch can be used for several optional functions, including a preamp voltage boost. "The cool thing about boosting the preamp voltages, is that it alters the way the amp responds and distorts without affecting the power tubes," says Jesse.

"You can have a standby switch in there instead, although the valve rectifier makes that less of a necessity. Or if you want, it can be used for pentode/triode switching, which drops the output quite a bit. As the amp is only around 20 watts to start off with, making it even quieter isn't so popular, but I've had requests for it.

"I just added another option that will make pentode/triode switching redundant - by replacing the ground switch with a pot, I can implement a circuit that will allow the user to sweep from full power down to about five watts, while the amp retains its character very nicely.

"I have several orders for that particular option at the moment. Another small change is the addition of a fan to help keep the power transformer cool. It's practically noiseless."

Plugged in and warmed up, the Model 20 not only nails that fat vintage Tweed tonality, but takes it on to a new level of sophistication. At lower volumes, the Lazy J's clean sounds are among the best we've ever heard, with a natural compression as the amp squeezes every last drop of sustain from each note.
Hit a big open-string chord such as a Major 9 and the Model 20 rewards you with complex, bell-like harmonics and an almost three-dimensional interplay between intervals.

As you turn it up gradually, this compression effect becomes more accentuated as the amp goes into cut-off, delivering a thick, fluid sustain with an edgy bite that favours bright PAF-style pickups or single-coils.

"That tone is mainly coming from the power tubes and the loudspeaker, and coloured by the pine cabinet, which I make myself. It resonates much more than a plywood or chipboard box," says Jesse.

"I prefer the sound and reliability of the 6L6 and GZ34 combination over the 6V6 and 5Y3. It adds a little more power and keeps the bottom-end tighter, making the amp more useful for live work. As for the loudspeaker, for me the Celestion Blue is the best there is. It's expensive, but you can't get that tone without it."

With controls for level and tone, the reverb module makes it easy to get all kinds of effects, from crashy bright Dick Dale surf, to the airy warm ambience favoured by modern fusion players such as Robben Ford or Larry Carlton.

Unlike the originals, The Lazy J's noise performance is excellent, although like many similar amps, it's dependent on high quality valves for the lowest noise levels.

Not every guitar player is going to click with an amp like this immediately. The Model 20 demands you put a lot into every note, but if you do you'll be rewarded with staggering tone that ranks up there with some of the best small boutique amps we've ever plugged into.

With amps like this, there's often a fine dividing line between hand-made and home-made with respect to quality, and the Model 20 is definitely in the former category in terms of build and attention to detail.

Okay, it's not cheap, but factor in the loudspeaker accounting for nearly £200 of the asking price on its own, and all of a sudden the Lazy J begins to look like excellent value for money.

The fact that it's also made right here in the UK is a bonus that can't be ignored either. Hoff is already coping with a rapidly expanding waiting list - Nine Below Zero recently took delivery of a Model 20 and this review sample has already been sold too - so if the Lazy J amp sounds like your idea of tone heaven, our advice is to get your deposit in quickly.