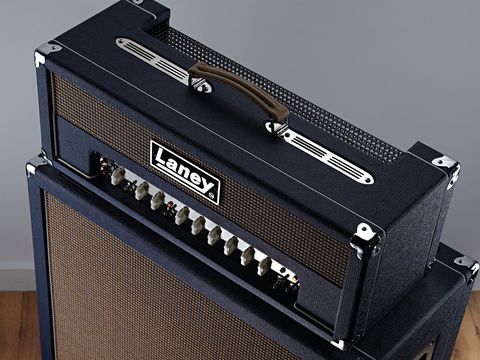 One of the best-sounding amps we've ever plugged into, this Laney could change your world if you try one.

One of the great names in guitar amplification and one of the longest-established British brands, Laney has been exporting amps and speakers from the Black Country to the rest of the world for over four decades, and company founder Lyndon Laney is still in charge today.

Heavy metal started on Laney's home turf and Sabbath legend Tony Iommi is a lifelong Laney user. But despite its association with the genre, Laney's expansive catalogue includes products to cater for all tastes.

"As you turn up the volume, the power stage comes to life for a seductive rhythm sound that's among the best we've heard on any guitar amp."

The Lionheart range is aimed at players who want to rekindle the excitement of playing through a simple all-valve circuit, with a look and feel reminiscent of the late '60s or early '70s - a golden age for electric guitar. This month we're looking at a new addition to the range in the shape of the L50H head, partnered with the L412 cabinet.

There's no doubt the L50H is aimed at players who prefer a classic look and feel - the dark blue vinyl, white stringing, piping, and two-tone vintage Somweave grille cloth combine with the chrome panel and white chicken head knobs for a very vintage look. It's neatly executed, with close attention to detail and bespoke design elements such as the chrome top panel vents that extend into anchors for the grab handle. The top rear quarter of the head box is open and features a large metal ventilation grille.

Peer through this and you'll probably do a double-take or two, as the L50H has not four but five - yes, five - EL34 power valves. This is because the Laney's power stage isn't the typical push-pull circuit you'd expect to see in a 50-watt head. Instead, the L50H's five EL34s are wired in parallel, all running in pure single-ended Class A with each valve producing about 10 watts.

The extra current demands of five permanently-on EL34s necessitate a big power supply, and the L50H sports a suitably massive toroidal mains transformer at one end of its heavy-duty steel chassis, with
a conventional speaker transformer of epic proportions at the other. Laney is possibly unique in using toroids on guitar amps; more common on hi-fi gear, toroidal mains transformers produce a much-reduced hum field that makes for a cleaner audio signal, which is very important in a high gain circuit where hum can be magnified a thousand times or more.

Most of the other electrical components live on two large high-quality PCBs, which have been through-plated for extra reliability. The main PCB supports the three preamp valve bases and front panel controls, while another accommodates the five EL34 valve bases, with two smaller boards for the rear panel jacks and effects loop. The standard of soldering and wiring is very good and looks clean and robust.

The L50H is a straightforward two-channel design, with a single clean channel volume control and gain and volume on the drive channel sharing a passive three-band EQ. A switch called bite emphasises the highs, while another toggle switch changes channels when the supplied two-button switch isn't in use.

There are active master tone controls for the output stage called tone and dynamics, which govern high and low frequency response respectively. The L50H also boasts a digital reverb and a series effects loop.

Despite being heavy, the head is relatively compact and balances well on its single carry handle. In contrast, the L412 cabinet is almost big enough to park a car in, let alone four Celestion G12s.

Overall, the head and cab look smart and both are built like the proverbial brick outhouse, which makes them ideal for pro-standard touring.

With pure Class A providing no crossover distortion and no odd-order harmonics, we were hoping the L50H would sound good, but we weren't prepared for just how good. Using our regular test-bed Strat, the L50H's clean channel is bright but not at all shrill or piercing, with a powerful, tight bottom end and a warm but not too powerful mid-range.

We found ourselves rolling off a little treble with the Strat, while swapping to a Les Paul Standard produced nicely balanced clean tones with all the EQ knobs at roughly halfway. As you turn up the volume control, the power stage really comes to life with a hint of drive at around the halfway point, for a seductive rhythm sound that's among the best we've heard on any guitar amp.

Continue turning up and the tone thickens up with more drive still, but at this point the best sounds are found on the L50H's medium gain drive channel, which has a highly expressive solo tone with a wide dynamic range. It doesn't have the distortion of a modern metal amp, but blues and classic rock fans will be able to find all they need here, with excellent balance and clarity.

The L50H's class A magic makes for an amp that really comes alive when you turn it up to gig levels, with superlative touch-sensitivity and an almost three-dimensional clarity that really helps the guitar find its place in a noisy live mix.

We're not completely convinced by the L412 speaker cabinet though; the extended bass range tends to detract from the amp's otherwise super tight response. We also tried the L50H with open- and closed-back 2 x 12 enclosures with much better results.

This isn't just one of the best Laneys we've ever tried, it's one of the best-sounding amps we've ever plugged into, eclipsing some boutique products costing over twice as much. Aimed at pro users and well-heeled amateurs, it's perfect for classic rock or blues.

For a Laney it's expensive, but when you put it up against other amps in this genre, it represents excellent value for money. The styling and blue colour scheme may be a little bit contentious for
some but it's restrained enough to retain a general vintage appeal that most will find acceptable.

Under the skin,
like all Laneys, the build quality is first class and the L50H should provide years of trouble-free use. If you're in the market for a high-end boutique amp, check out the L50H before you think about sending your hard-earned
cash overseas. It's really going to surprise you.