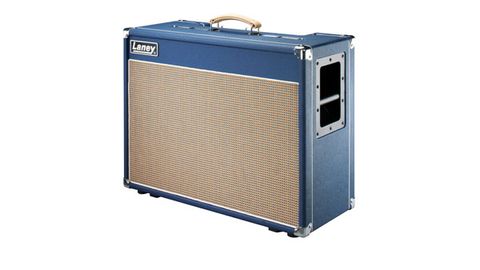 The colour scheme may be polarising but the sounds aren't: world-class tone at a very affordable price.

Whenever someone mentions the words 'boutique guitar amp' to you, what location springs to mind? We'd bet it probably isn't Halesowen in the Midlands... Nevertheless, Laney's Lionheart series consistently surprises us every time we plug into one.

The range continues to grow, with the recent addition of the L20T 212 combo, which uses four EL84s wired in parallel single-ended to provide around 20 watts.

For this particular amp, Laney has returned to the 2x12 combo format with a twist: there are two different loudspeakers. Celestion's Vintage 30 and G1230H are sonically very different, so having both in the same cabinet is a cool concept, giving players a choice of two distinct tones when mic'ing up.

Like all Lionheart amps, the L20T is built to a very high standard, with top quality PCB-mounted electronics, including a bespoke digital reverb. Laney's trademark toroidal mains transformer helps reduce pickup hum, keeping the audio as clean as possible.

With two beefy 12-inch loudspeakers, you can probably guess the L20T is no lightweight, but a solid pair of grab handles make it less of a chore to cart around. There's also a handy built-in tilt bracket on the cabinet base.

The L20T is remarkably quiet in operation, thanks partly to the doughnut-shaped mains transformer. The two-channel preamp features a shared EQ with separate volume controls and a gain knob on the drive channel.

Another unique feature is the master tone control, sat right at the very end of the preamp, shaping the amp's response.

The clean sounds have a bell-like clarity, with a seductive chime that turns into an edgy bite as the volume rises. Meanwhile, the drive channel's wide-ranging gain control caters for most tastes, from blues to classic rock and more.

There's no particular bias to single coils or humbuckers - we tried a selection of different guitars and the L20T flattered them all, with a touch-sensitive vocal distortion that made it easy to pull out some authentic classic rock and blues tones, which can be aggressive or soulful with a twist of the master tone knob.

The mix 'n' match loudspeaker idea works really well; each driver complements the other and no noticeable volume mismatch.

The L20T is a serious boutique amp with more versatility than many and a price that's almost embarrassingly affordable. We can think of a few well-known competitors that cost three times as much, and are frankly struggling to keep up with the sonic excellence here. It's built like a tank, and should handle anything that pro touring can throw at it.

The blue vinyl won't be to everyone's taste (perhaps Laney should offer a few limited-edition colour choices), but we can't fault anything else.

If you're in the market for a big combo, check out the L20T - it's true boutique tone at a price that won't break the bank.