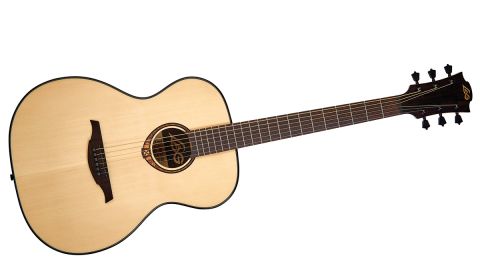 A great-looking guitar that won't let you down in the studio.

If the style of Lâg's T70DCE impresses, the upper-level 300 spec adds more class to proceedings.

We have that same Lâg headstock, faced here with a darker front that matches the fingerboard (simply referred to as 'brownwood' on both models) and the black graphite nut and saddle.

Along with a smart gloss finish that doesn't look overdone, we get the visually dramatic flamed ovangkol back and sides, with a pretty matching soundhole inlay, black edge binding to the top and back - which is quite heavily radius'd.

Even the rather angular heel of the three-piece khaya neck (also known as African mahogany and used through the range) feels a little smoother, not least due to a proper satin finish.

There's class aplenty to the classic auditorium/000 body, too, here purely acoustic and non-cutaway, and with a trimmer depth than the dread, which might only be around a 7mm reduction but gives it a more comfortable, less bulky feel played seated. Like all three Lâgs, we have a second strap button at the heel, so affixing a strap is easy.

There's good low string to high string balance, too, and an attractive controlled response with fingernails, but it has a wide dynamic range: dig in with a pick and the sound adopts a bluesier, less modern character.

On the one hand, it's a near-perfect modern picker; it loves dropped and altered tunings, with a tonality that'll record very nicely, but for rootsier styles, especially with a pick, there's plenty of oomph, too.