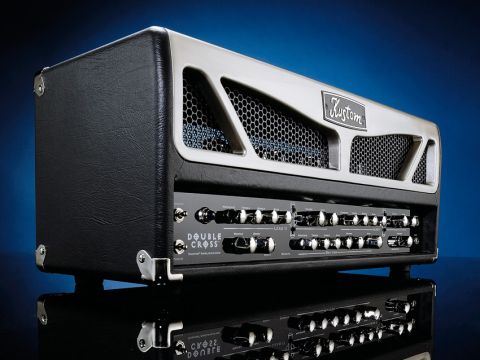 A true rock and metal monster that stands head to head with the leading names out there.

While not exactly practical for life on the road, Kustom's definite kitschy-cool Tuck 'N' Roll appeal hooked in plenty of 1960s and 1970s musos. Amps, PAs, organs and Talk Boxes found their way onto the stages of Stevie Wonder, Jeff Beck, Johnny Cash and countless other rock and pop luminaries.

The brand languished in the 1980s until it was revived in the mid-1990s, and is now steered by ex-Peavey big hitter Bill Xavier and amp designer James Brown, who achieved considerable success on the Peavey Classic Series, 5150 and early JSX series amplifiers.

Now comes Kustom's flagship Double Cross, a no-nonsense all-valve, pro-oriented rock and metal monster. Built partly in China, but assembled and finished in the USA, it's a new design that isn't so much Swiss Army knife, as infinitely twistable broadsword…

The amp itself is based around a three-channel design, designated Rhythm, Lead I and Lead II, indicated with a coloured LED behind the channel name when it's selected.

"I chose to make the Lead I channel have a little bit more scooped-out middle," says Brown, "so it sounds more like a typical chunky rhythm sound. Lead II is more of that cranked-up, screaming lead tone. Most of the time I find that guys either like a nice tight distortion, or they like it kinda thick and buzzy."

Switching comes courtesy of the included five-button footswitch; one-touch operation for instant channel changes, plus boost on/off and effects loop on/off. The high-quality switch has matching LEDs to the head, so you know what's selected.

One hidden feature of the switch is that you can program the effects loop to switch in automatically to any or all of the channels or the boost mode: neat. It connects via a quarter-inch stereo/TRS jack lead - easy and cheap to replace if you need to - and the whole shebang will work off an external MIDI controller too.

There are two input options 'tight' and 'normal'. James Brown: "We're used to seeing amps with two inputs, but nobody uses the low-gain input, so that's a waste of time. The tight input tightens up the attack and you can hear how it's floppier in the normal input. Like this [tight] is your Angus input and this is the Malcolm input [normal]!"

Each channel has its own set of gain, volume and EQ controls. Starting with the rhythm channel, you also get drive and bright switches for further tonal shaping. The two lead channels introduce the Double Cross raison d'etre, because mounted within the Gothic cross symbol are four mini switches, one set per channel.

In short, they're essentially gain and tone-shaping switches to enable you to get the right balance of gain, cut, saturation, resonance and note-definition in your sound. The switches are: 'bright' for a quick and tight attack; 'drive' for an increase in gain, compression and saturation; plus 'tight stage' and 'thick stage', which each bring in another half a 12AX7 valve for more gain in the upper and lower frequency spectrums.

While it sounds complicated, anyone who's plugged into a high-gain amp and wanted, say, more pick dynamics, better note articulation, or maybe a more squashy, maxed-out feel, will soon get the point.

The front panel is finished up with a global master volume and a boosted volume level. The boost works as an addition to the master, so they're not separate volumes; boost is always extra over the master setting.

On the subject of power, James Brown has chosen six output valves instead of the usual four for around 100 watts. Standard issue are 6L6s but you can use EL34s for a different tonal response should you so desire thanks to the included auto bias switch.

A quick look at the rear panel reveals some nice inclusions. Brown's excellent speaker-emulated DI from the Coupe series is included (hooray, a credible alternative to mic'ing for live use), as is a series effects loop with send and return levels. Send ranges from -10dB to 0dB to deal with a wide range of pedals and rack units.

Like the vast majority of modern multi-channel amps, inside the circuit is based around custom-designed, through-plated PCBs mounted on metal standoffs from the sturdy steel chassis. A quick poke around suggests that it's not bullet-proof, but to be fair that's par for the course in this type of amp: very few manufacturers are doing it significantly better.

Now hear the amp in context in the following piece:

Starting off with a Celestion Vintage 30-loaded closed-back 4 x 12 and plugging a Strat into the normal input, the rhythm channel has plenty of the low-end bloom, fatness and character you'd associate with a 6L6 amp.

It offers cleaner Hendrix and Stevie Ray tones - not what you might expect from a metal amp, though reverb is the obvious omission. Leaning on the masters, there's plenty of makes-you-blink attack and punch, which you can soften with the EQ, or by balancing the gain and master, pushing the front end all the way to a vintage-y drive, all the more so when you switch to a Les Paul's humbuckers for a satisfying classic rock crunch.

This channel alone would make a good single-channel blues-rocker, with plenty of headroom for some tasty pedals. The EQ is powerful but, for another option, the 'tight' input seems to reduce some of the lower mids and bass - very useful in a busy band mix where you need to cut through and hear individual notes in chords more clearly, especially with a bottom-heavy guitar such as a Les Paul.

Switching to Lead I the noticeable mid-scoop bias accentuates a Strat's thinner middle, which can result in a little wiriness; switching in the 'thick stage' on the Double Cross switch adds extra gain and a touch of pick-sensitive compression. Pseudo-Blackmore tones are here when you crank it, but it's humbucker players who have most to gain, quite literally.

So, a suitable humbucker guitar, Lead I, all switches out, gain at 12-o'clock: the distortion is thick and full with a fuzzy edge that's tamed or accentuated by tweaking the powerful treble pot. Adding in the drive switch brings yet more saturation to the party and also a touch of compression where the notes bloom noticeably as they sustain out.

Thick stage brings in more to the low mid-range adding girth, especially around the middle strings, at the slight expense of note definition. Tight stage adds it back in with an apparent kick in the upper mids and high-end. This is melting modded Marshall territory and then some, and there's still plenty of gain left for the truly troubled among you.

Switching to Lead II with the same settings, there's an immediate and obvious kick in note articulation and midrange aggression, where Lead I's fuzzy distortion is toned, tightened and brought forward a decade or two. More modern metal fans will doubtless prefer this for its cut, especially for solos and single-note passages; fusioneers too, using the tight input to keep it all together for maximum articulacy.

The Double Cross switches work much the same as they do in Lead I that, when used in conjunction with the normal and tight inputs - and indeed the individual channel master/ overall master balance - returns an incredibly wide range of textures and responses for any style of music that requires tons of gain.

Moreover, that tweakablity comes into its own at real gigging volumes to make sure you're hearing and, perhaps more importantly, feeling it like you want to.

There's no doubt the Double Cross is a flexible, fine-sounding amp for high-gain styles and it's a capable blues machine in the rhythm channel too. It hits the market at a time where the post-metal melee seems to be giving way to more classic and hair metal bands: perfect.

The unique combination of features enables you to dial a tone that - and here's the important part - 'feels' right under your fingers, as well as sounds how you like it to. From Southern rock, through EVH and on to crushing modern metal, it covers a lot of ground.

Whether the majority of heavy rock guitar players can be bothered to engage with it and take time to understand it fully will be the acid test, as will players' willingness to accept Kustom alongside brands such as Mesa/Boogie, Randall, Krank and indeed the UK's own Blackstar. On its quality and performance alone, there's absolutely no reason why we shouldn't: this is a raucous rocker alright.