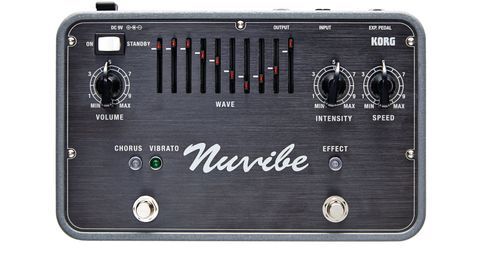 The Uni-Vibe and beyond... a fine modulation pedal with the ability to dial in familiar sounds but go further.

The Uni-Vibe pedal is legendary, but enjoyed only a relatively brief production run, and since its discontinuation there have been various attempts to revive it, with pedals by both major and boutique manufacturers aiming to emulate its sound.

This latest version is from Korg, which has some claim to being the original manufacturer, and is the boldest yet: the company has harnessed the expertise of the original designer, Fumio Mieda, to create a pedal that stays true to the sound and control options of the original but adds practical new features and a degree of build consistency that original units struggled to maintain.

The modern innovations include true bypass, and a footswitch to select chorus or vibrato modes rather than the original's rocker switch, but the wholly new feature is the ability to shape the modulation waveform using 10 sliders.

These light up red, flash in sync with the modulation speed and can create the sound of an original unit by being positioned according to a series of white marks that define the relevant off-centre sine wave.

The Nuvibe is a giant of a pedal, and a very solidly-built one at that. Korg has kept the large form factor of the original, which makes sense, allowing the 10 sliders to be robust and not at all fiddly to operate.

Also included is an expression pedal, connected via a supplied three-metre stereo cable to control the modulation speed, disabling the normal speed knob when plugged in. The speed is fastest at the toe-down position and, at the full heel-down position, a small unlatch switch comes unobtrusively into play to cancel the effect.

A Uni-Vibe is essentially a four-stage phaser based around a light bulb and four surrounding sensors, but the original photoresistors are unavailable as they used Cadmium Sulphide, now designated as a hazardous substance, so Korg has opted for a different approach and used 79 (count 'em!) transistors in the circuitry.

The sound seems the same, however: with the faders set in the recommended position, it is extremely close to an original. Okay, we don't have an original to compare it to, but we do have one of the most well-respected clones, and we do have the recordings of Machine Gun, Star Spangled Banner, Bridge Of Sighs and Breathe. The Nuvibe was able to faithfully replicate all of those sounds (even if we don't quite have Jimi's touch!).

True to the original unit, there's a change in core tonality as you switch the Nuvibe in, which we'd probably describe as a slightly mellower top end. While vibrato has its uses, the chorus sound is the main deal here, offering hazy liquid phasing with a range from a deep throb to a fast warble.

The sliders are the real innovation, however: there's a myriad of different positions that you can have them in, and all sound distinctively different. As well as subtle variations on the classic Uni-Vibe sound, you can create an angular square wave to give you more of an on/off effect, and you can have alternate sliders set to zero, which offers variations on a step sequencer-style effect. We even got something reminiscent of ring modulation out of it.

Plenty to explore here, then, if modulation is your thing, but we could take or leave the expression pedal: it does complete the original feature set and is useful if you want to quickly change between two speeds, but as a dynamic effect, it's not always musical.

A street price of around £400 is a lot of money to pay for any pedal that does variations on just one effect, so we wouldn't expect this to be on the shopping list of the casual user who's more likely to stump up for one of the multi-modulation pedals, phasers or less expensive 'vibe' pedals that cover similar ground. No, this is a pedal for those who are diehard fans of the Uni-Vibe, and we know that there are plenty out there.

While Korg doesn't own the Uni-Vibe name, it can claim the ancestry and the Nuvibe can, on several levels, truly be regarded as an updated version of the original.

Just as the Uni-Vibe was pushing boundaries in the late 60s, the Nuvibe retains that spirit with the inclusion of the sliders; so, while what you are getting may be rooted firmly in the past, with the ability to recreate old glories, it also has plenty onboard to create new ones.