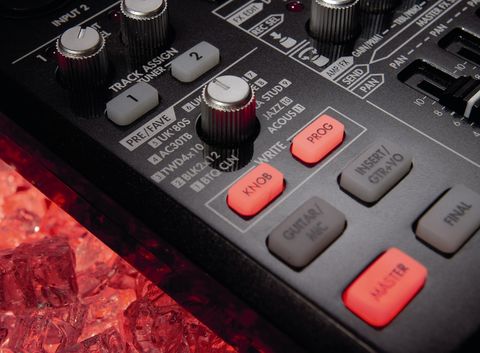 The small size of the D4 makes it ideal for keeping in close proximity, but it doesn´t detract from ease of use because it´s a very well thought-out and functional machine. It´d be even more functional if it could run off batteries but, hey, we can´t have everything. Overall then, the D4 is a delight to use and a great resource for practising, rough-and-ready recording of ideas, or for meticulously putting simple demos together.

Korg´s PXR4 pocket-sized multitracker is a very useful little box of tricks, combining the REMS amp and effects sounds as found in the Pandora units with some preset drum rhythms and a four-track recorder - making it a fine tool for both practising and working out song ideas.

Compared with the instant ease of use of a larger tabletop machine, however, the PXR4 may be a little lacking.

This could be why Korg has rustled up the D4, which sports similar features but is laid out to resemble a miniature version of one of their larger D-series tabletop machines. The D4 is a four-track machine capable of recording two tracks simultaneously to a removable CompactFlash card (a 64MB card is included). There are inputs that can accommodate mic, line or guitar signals directly, and there´s also a built-in mic.

The recording format is mp2 and there are three modes of quality that each provide you with a different amount of recording time. If you do have plenty of card capacity, there´s also a lot of freedom to record alternate takes, as the D4 provides eight virtual tracks for each playback track. Effects can be applied at the input stage, and you can plug straight in for a fully produced guitar-with-amp-and-effects sound courtesy of the REMS amp-modelling technology. There are 100 presets and 100 user memory spaces and these include effects for vocal, keyboards and other sound sources, although most are for electric guitar.

Eleven of your favourite sounds can be assigned to a front panel rotary knob for instant access. Hands-free recording is supported by an optional footswitch, or by programming in exact locations for recording to stop and start; there are plenty of audio-editing functions, too, including time compression and expansion. This is a feature that isn´t always found on a compact budget machine. In addition, arrangements using more than four tracks can be created by using track bouncing in time-honoured fashion. For timekeeping duties, the D4 has a bunch of preset rhythm patterns. One can be set to run for the length of your song, or can be turned on to run constantly so you can play along. At mixdown, you can set the level and pan positions of each track and add a send/return effect like reverb.

A final mastering effect is also available to tighten up the overall sound of your stereo mix using compression and EQ. You can do a stereo mix including drums by sending audio out to a stereo recorder, or by converting the song into a stereo mp2 song file that can be played on a computer. A USB port ensures computer connection, also enabling you to save recording data to your memory card.

Immediacy is exactly what the D4 provides. If you´re looking to use it purely for practice, you can instantly choose a guitar sound from the ‘favourites´ knob, set one of the internal rhythms running and get on with it. There´s something for everyone in terms of musical styles and time signatures among the rhythm presets, which are mostly good-sounding, straight-ahead kick, snare and hat patterns. The REMS amp sims also provide good and extremely usable sounds to suit all tastes, with a bunch of presets that range from country clean to full-on metal distortion.

All the popular amp types are represented here, with some cool modulation and ambience effects in the chain. Tweaking any of the preset sounds to suit is easily carried out using five rotary knobs just below the display. As for recording, the great thing about the D4 is you can get it up and running and create a new song in the memory in seconds, should you wish to use it as a musical sketchpad to quickly capture ideas. In fact, all the functions are easy to operate and quick to get to via an 11-way ‘mode´ switch, so there´s very little messing about. No problems with recording quality either: it´s not quite CD standard, but fine if you want to make a reasonable-sounding demo or just stockpile your ideas.