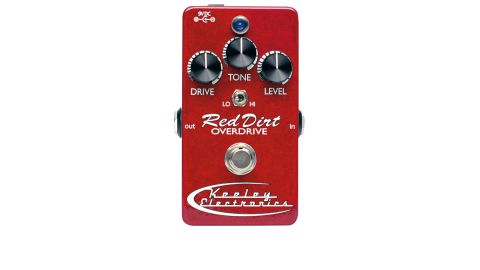 Exceptional quality and tone from one of the most respected names in the pedal business.

The Red Dirt Overdrive feels like a logical evolution for Keeley. Were it green, you might get a stronger hint that it represents the culmination of Keeley's learning in the Tube Screamer world.

A peek inside reveals an RC4558P op-amp (early TS-808s were noted for using it), and while we're in there, it's worth noting the quality of the components and build: this is pro-grade stuff, obviously with a high degree of human involvement.

The Red Dirt's two modes, 'lo' and 'hi', give you access to Keeley's 'plus' and 'baked' modes: popular mods to TS-808s and TS-9s, respectively, that beef up the low end and give more range in gain.

With a Keeley 'Mod Plus' TS-808 on hand for a direct A/B with the Red Dirt ('lo' mode), the tonal signatures are very similar; thick, mid-rich overdrive that retains striking string articulation and dynamics. Fender-style guitars and amps are the best-suited partners, Strats gaining the kind of girth you'd associate with SRV, Kenny Wayne Shepherd and John Mayer.

The Red Dirt retains clarity better than the 808 Mod Plus, and goes dirtier, giving it a wider appeal. It'll do a near- clean boost in 'lo' mode, through to fat, syrupy, harmonically rich overdrive in 'hi'; soft and thumpy with the tone knob down, aggressive and cutting with it up.

The Red Dirt certainly ticks the boxes as a fully formed graduate of Tube Screamer school.