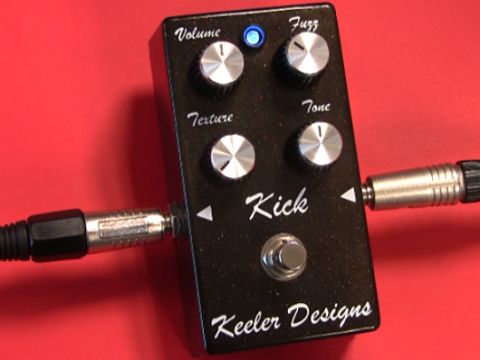 A killer one-stop fuzzbox that can produce scratchy lo-fi textures as readily as fat Muff and Fuzz Face-style sustain, and there's plenty of scope to sculpt your own signature fuzztone too. Worthy of a place on anybody's pedalboard.

Alongside Tube Screamer-style overdrive, fuzz is one of the boutique effects world's twin obsessions. From Fuzz Face, Big Muff and Tone Bender clones to innovative new designs like the Zvex Fuzz Factory, there's definitely no shortage of options for the fuzz-hound. In fact, there are so many fuzzboxes out there that it can be bewildering for players who are dipping their toes into the murky waters of transistor clipping for the first time.

One glance at the Keeler Designs Kick's price tag and it's immediately apparent that this isn't a stompbox for fledglings. What we have here is a lovingly handmade, pro-level true bypass boutique pedal with the build quality to cope with almost anything that life on the road can throw at it.

Unlike many boutique pedals that are a clone or an update of a particularly desirable vintage circuit, this pony has an abundance of tricks in its repertoire. With a huge level hike on tap from the pedal's volume control, there's plenty of scope to use the Kick to boost and fatten your amp sound with the fuzz control in its lower reaches.

Crank up the fuzz past 12 o' clock and beyond and the texture knob becomes the most important tone-shaping tool. Hard right is the place to go for full-bodied drive sounds with a little hair around the edges; think Billy Gibbons then Big Muff-style sustain as the fuzz control is wound up, although rolling back the guitar's volume retains plenty of twang, especially if you are using single-coil pickups.

As you twist the texture control anti-clockwise proceedings get somewhat grainier and more like a Fuzz Face in character, while set hard left it generates velcro fuzz with the hint of a high octave harmonic on single notes becoming more overt as you wander up the fretboard. In addition, there's a splattery, almost gated decay that's in the same ballpark as some of Jack White's overloaded guitar tones in The Raconteurs.

Experimenting with different pickups and dialling in more treble from the tone control, it's also possible to get close to the scratchy '60s sounds on The Spencer Davis Group recording of Keep On Running and Hello, I Love You by The Doors. Backing off the guitar's volume now makes for some wonderfully mangled anti-tones that are almost 8-bit in character.

Versatile indeed, the Kick isn't just a compendium of classic sounds; it also yields plenty of original flavours too.