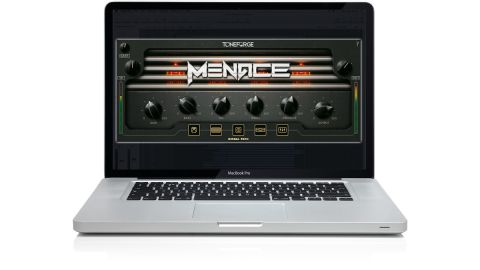 This plug-in was designed for one thing and one thing only: metal - something it does superbly, and at a pretty darn good price, too.

You may not be familiar with the name Joey Sturgis, but he's a producer who has worked with some of the biggest names in metalcore, including Asking Alexandra and Of Mice & Men, and as such, his sound is extremely sought after.

In response, he's launched Joey Sturgis Tones - his own line of high-quality and affordable audio plug-ins for your DAW, including the high-gain playground that is Toneforge Menace.

JST's Menace has been designed specifically for metal guitar players, and it's very much a plug-in-and-play piece of software, with very little editing required to get an instant modern heavy guitar sound.

The interface consists of six sections, five of which are user-editable - you get the amp, a TS-esque overdrive, cab with four mic'ing options, a three-band parametric EQ, and at the end the chain, a limiter control.

The limiter section is particularly useful for keeping those muddy frequencies in check when thumping out high-gain palm- muted chords, while the sixth section consists of a single button, which activates 'Joey's Magic Post Processing'. Kick it in, and it allows the guitar to 'lift-out' and scythe through even the most brutal of metal mixes.

Anyone who needs a usable, mixable metal guitar sound with minimal hassle will find instant gratification with the Menace.