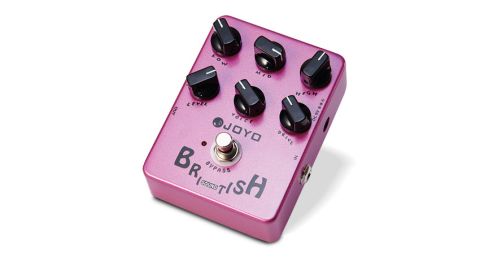 It's built to last, and packs much more versatility than we expected, offering a simple one-stomp solution for classic rock and blues.

We first encountered Joyo pedals back in July of last year, when we looked at the Analog Delay, and we were hugely impressed by the quality of tone that we were getting for so little money. The British Sound is a preamp that looks to emulate classic Marshall tones, and we can't wait to see if Joyo can pull off a repeat performance.

"It has grit and raunch in spades, but the voice control is the key to getting the most out of the British Sound"

The controls on the pedal are fairly straightforward, with the gain control taking you from a slight break-up through to a reasonably saturated drive, which works perfectly for classic rock.

It has grit and raunch in spades, but you're only unlocking half the pedal's power if you ignore the voice control, which is the key to getting the most out of the British Sound.

Set it down low and the gain range goes right down with it, giving you the vintage response of an old combo pushing a warmer, sweeter drive out of its smaller speaker.

Turning it clockwise takes you closer to a modern stack voice, with increased gain to match. Mastering the EQ here can be a little tricky, and with the voice switch set to the left, it's easy to overload your sound with too much gain.

Keep experimenting between controls, though, and you'll find a surprising range of sounds that react to your touch and attack in just the right way. For such a modestly priced pedal the British Sound really impresses.