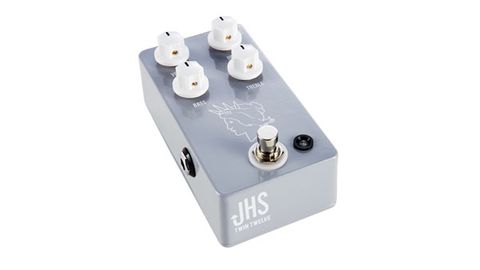 The Twin Twelve from US firm JHS Pedals is perhaps the first stompbox designed to replicate the sounds of a Silvertone.

The Silvertone 1484 60-watt amp, produced between 1963 and 1967, has cult status owing to its use by the likes of Beck, Death Cab For Cutie, Jack White, Vampire Weekend and Coldplay.

The Twin Twelve is designed to replicate the amp's preamp/ overdrive tones, albeit without having to crank it like you would with the original non-master volume amp.

While juxtaposition of the volume and drive knobs can give you clean boost, the magic lies at higher drive settings where the saturated harmonic character of the overdrive and its fuzzy edge comes to the fore.

The Twin Twelve provides overdrive with a different flavour in front of your amp, but it's also a great standby for studio work where the sound of a different amp could make a track.