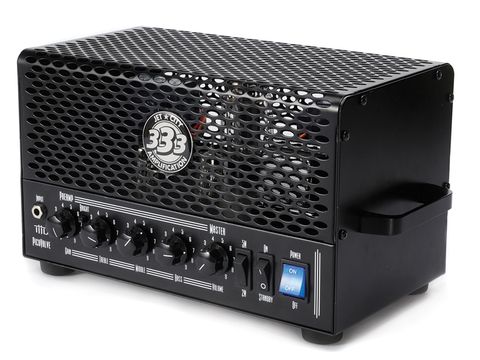 Maybe with the right power valve this Jet might really take off.

There are more micro valve amp heads on the market at the moment than you would dare to shake a whammy bar at. Hell knows we've reviewed most of them, including some belters from the likes of Vox, Blackstar and Mesa/Boogie. But all that overcrowding doesn't mean there isn't space for one more worthy contender - if it can cut the mustard.
"It only has one channel to worry about and the simple control layout is a joy to tweak."

Enter the new Jet City PicoValve head. Packed with a pair of 12AX7 preamp tubes, and a big fat 6L6 in the power section, the PicoValve is the brainchild of THD Electronics guru Andy Marshall.

Like Andy's now legendary THD UniValve, the PicoValve is designed so that it can run pretty much any power valve without needing to be rebiased.

Long story short, biasing is a complicated procedure that ensures the amplifier's valves are running at their optimum level. It's a bit like tuning a car: the better the engine is set up, the greater the performance and the longevity of parts. The same goes for valves.

The 6L6 power valve that comes with the amp is traditionally featured in the engine room of American amplifiers (the Fender Bassman, for example). If you prefer a classic British rock sound, try fitting a valve that's stamped with the legend 'EL34'.

As it's a head, you'll need a cabinet to run the PicoValve. We chose the Jet City JCA12XS cab (£152) fitted with a 1x12 Eminence speaker. Once that's sorted you'll find that navigating your way round the amp is a breeze. It only has one channel to worry about and the simple control layout is a joy to tweak.

You can set the amp to run at five or two watts. Kicking off at maximum wattage, our immediate impression is, well, a bit flat. Clean, the amp sounds a little anaemic to these lugs, although it does work OK for jazzy chords and runs. Cranking up the gain doesn't help as much as you'd hope.

There's enough saturation for any gain lover, but as you crank you lose definition between strings, powerchords sound mushy, and bottom string riffs a little flabby. Switching down to two watts helps smooth out the fizzy overdrive a bit, and digging in brings out the attack even further as the amp starts to compress more.

In the lower wattage setting the amp can sound a bit dark, but the bright switch lives up to its name and adds a little sizzle.

Given this amp's illustrious pedigree, we expected to be ankle-deep in our own drool at the end of this review. In the end, it doesn't quite have the wow factor we experienced with some other little heads.

That said, the fact that you can customise the power section with different valves - reasonably quickly and without any annoying tweaking required - should still make it intriguing to all you toneheads out there.