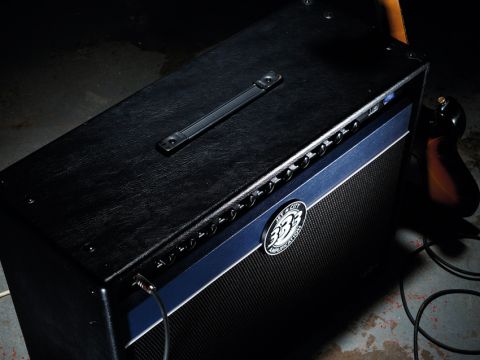 The higher price compared to other amps in the range means higher expectations. It's not going to trouble a real Soldano, but for the money this is still a good amp.

Since we first encountered Jet City amps, the USA brand has been steadily building up its business in the UK, and with good reason.

Based in Redmond, Washington, Jet City products are made in China, but designed in the USA by some seriously qualified amp gurus, including Michael Soldano, THD's Andy Marshall and Ben Verellen, who are all based in nearby Seattle, hence the Jet City moniker.

With a fully loaded catalogue of heads, combos, cabinets and pedals, Jet City is aiming squarely at the middle of the amp market; but with such heavyweight design connections, the company is getting interest from lots of top players, too.

Now, we're taking a look at one of Jet City's newest combos, the Soldano-designed JCA5212RC. We were very impressed by the JCA2112RC we tried in November last year, but at nearly twice the cost of its very-good-value brother, can this live up to the price tag?

Like most Jet City products, the JCA5212RC is a relatively simple, stripped-down, no-nonsense design that's also typical of many original Soldano amps.

The emphasis has always been on creating as pure a signal path as possible, with a minimum of pull-switch-based frippery.

The generously proportioned cabinet is neatly covered in a medium-weight black vinyl, with a strip of blue vinyl on the front of the grille to set off the large circular Jet City badge.

The rear of the combo is open, but covered in steel grilles to comply with safety legislation, preventing you from using the interior to store mains leads, pedals and the like.

It's a hefty beast, thanks to two large transformers and a pair of Jet City-branded Eminence loudspeakers, but a single carry handle is all that Jet City provides - we think a product of this size and weight should either have a pair of recessed handles on the sides, or have provision for castors.

The 5212's electronics are contained inside a tough- looking large steel chassis that runs the full width of the cabinet.

One large circuit board holds everything, including all the valve bases, front panel controls and a small transformer to drive the 5212's all-valve spring reverb circuit. The only exceptions are the rear panel jack connections, which are mounted on a separate strip of PCB.

The circuit board is a through-plated affair with large, widely spaced tracks joining all the components, which are up to a good standard. It's all held in place by metal standoffs and looks robust and purposeful.

The 5212 is a proper two- channel design with separate bass, middle and treble EQ controls for both its clean and crunch channels.

The clean channel has a single volume control, while the crunch channel has knobs for gain and volume, and there are master controls for presence and the amp's spring reverb circuit.

However, the top of the cabinet overhangs the front panel, making it difficult to see the controls from a standing position - this isn't helped by the fact that all the controls are equally spaced from each other with their descriptions underneath the knobs. It takes some getting used to.

Around the back are a pair of send and return sockets for the amp's series effects loop, a stereo jack for the supplied two-button footswitch and a selection of speaker outlets, with a mains fuse holder and a tamper-proof switch for 120- or 240-volt operation.

Jet City's no-frills ethic means that apart from mains and standby there are no push/ pull or toggle switches on the front panel and, unfortunately, this includes as a means of changing channels. You'll need to have the footswitch plugged in to do this.

Similarly, there are no status LEDs on the front panel to tell you what channel is active, although there is one on the footswitch. We think this is a disadvantage and on balance we'd be happier paying a little extra for a channel indicator on the front panel.

Minor gripes aside, though, the overall impression the Jet City leaves us with is that it's a tough-looking, rugged package that should take regular gigging in its stride.

Powered up, the JCA5212 runs quietly with only a little hiss and hum, indicating this is a well-sorted design.

The clean channel is really clean, and is based on Soldano's Lucky 13, which has a similar topology to the 5212. It has lots of headroom and retains clarity pretty much all the way up to 10.

The best effects happen, however, in the middle third of the knob's travel, with subtle chiming effects giving way to a slightly edgy growl, depending on how powerful your guitar's pickups are.

We used a Strat loaded with regular output Duncan Alnico

Pros and a Fender Custom Shop '52 Nocaster, and the 5212 didn't disappoint, with glassy highs and a fat low end surrounding a restrained mid-range response that's especially flattering for single-coils and PAF-style humbuckers: the archetypal 6L6 tone.

The overdrive channel is based on Soldano's crunch circuit and as such it doesn't have the super-saturated thick overdrive you might associate with Soldano, instead it's a punchy, edgy, medium-gain tone with plenty of dynamic response.

It's ideal for classic rock and Texas-style blues, and the sound thickens up nicely once you take the master volume past six or seven.

Use a Strat and you can leave it clean and dig in like SRV, or pile on the gain and use your fingers to control the drive like Buddy Whittington.

For more sustain and distortion you'd need to add a suitable pedal, such as Jet City's own GS High Gain Boost or Afterburner Overdrive units, but we'd wager that many players will find all they're looking for from this channel once it's turned up to proper gig volume levels.

As we mentioned earlier in this review, Jet City is a mid-market brand that's piquing the interest of big names because of its design pedigree.

Subtracting the 'designed by Soldano' logo, however, and comparing the Jet City to other products at this price point also made in the Far East, this combo is certainly no worse, although we'd have to say it doesn't particularly stand out as being that much better in our opinion.

There's very strong competition in this sector of the amp market and Jet City's canny promo work has helped them get off the ground successfully. But the general lack of features on this particular amp means it has to deliver something special in the tone department.

And while the 5212 is good, there are other products at this level that can give it a hard time in that respect. Nevertheless, blues and classic rock players should definitely give the JCA5212RC a test flight; its medium-gain overdrive is ideal for playing this type of music and it takes pedals well.