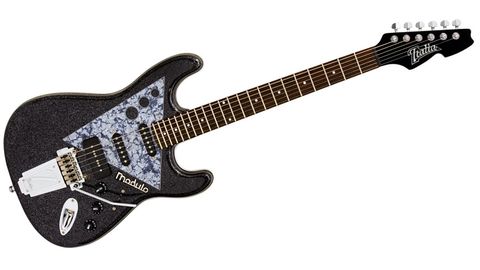 Great sounds for the money, if you can carry it off, visually.

Since 2000, Italia Guitars has allowed British guitar design mainstay Trev Wilkinson to get creative and explore the more esoteric corners of 50s and 60s guitar manufacture for inspiration.

Instruments such as the Maranello have proved popular with guitarists looking for something a little different from the Fenders, Gibsons and derivatives that clutter the walls of guitar shops across the land. Along the way, Italia guitars and basses have clocked up a considerable amount of mileage in the hands of celebrity endorsers such as Manic Street Preacher Nicky Wire and in the boot of Chris Rea's motor on the road to Hull.

Launched earlier this year, the model we see before us is representative of the Italia brand at its most out-there in aesthetic terms.

"Guitars don't come much wilder than this," says Trev Wilkinson of the Modulo Tipo 3, and while there's an, ahem, familiar body outline and control layout, the triangular four-ply pearloid scratchplate and silver piping plus faux snakeskin Tolex and guitar-shaped backplate at the rear contribute to a look that's utterly polarising.

Whether the Jetsons bathroom chic appeals or not, the admittedly weighty Modulo feels extremely comfortable and familiar in the hand, with the neck's rounded modern C profile fattening out pleasingly from the 8th fret upwards.

Not everyone will get on with the high-gloss black urethane finish, but the rosewood 'board is an appealing slab, and fretwork is neat and consistent. Straight out of the box, the combination of locking machineheads and two-point Wilkinson vibrato makes for a stable, confidence-inspiring playing experience, even when subjected to aggravated whammy bar abuse.

You may wonder if the nine chunky screws (one of which also anchors the strap button to the rear of the upper horn) around the back of the Modulo's body are cosmetic or simply holding the 'fake-skin' in place, but removing them, along with the four-bolt neck, yields a surprising discovery.

Fashioned from agathis, the body actually consists of a two-piece sandwich top and a separate four-piece back. The silver piping trim is stapled, upholstery-style, to the perimeter of the back section, and the whole thing isn't glued, but instead is held together by the aforementioned screws.

On paper, you'd be forgiven for thinking it's more 'tone wouldn't' than tonewood. However, a kooky pawn-shop aesthetic is central to Italia's brand identity, and while it's more than a little scary when you take it to bits, the Modulo's bolted-together construction is really no more off-the-wall than a ply-and-hardboard Danelectro or an Ampeg Dan Armstrong fashioned from a material developed for the windscreens of fighter planes.

Those designs were good enough for Jimmy Page and Keith Richards, so if you like the way the Modulo plays and sounds, you shouldn't let the unconventional way that it's put together deter you.

The Modulo, isn't obviously bound to any particular musical idiom since, with appropriately sympathetic amp tweakery, the sounds run the gamut from tight and funky Nile Rodgers and classic Knopfler and SRV Strat-isms through to a full-on Townshend Live At Leeds-style bark thanks to the extra firepower of the bridge soapbar.

Anyone who finds the average Strat-style bridge single coil to be a little too thin and weedy will love what happens when you flip to the back pickup on this guitar: the output is significantly hotter than the middle and neck units and it isn't wired to the tone controls, so you get maximum punch.

Although it's obvious that the design process at Italia is imbued with a magpie-like spirit, this guitar has plenty of its own personality and an array of sounds that are excellent for the money. While the Modulo's looks will prompt derision and devotion in equal measure, it has the sonic muscle to deliver the goods in a wide range of musical contexts.