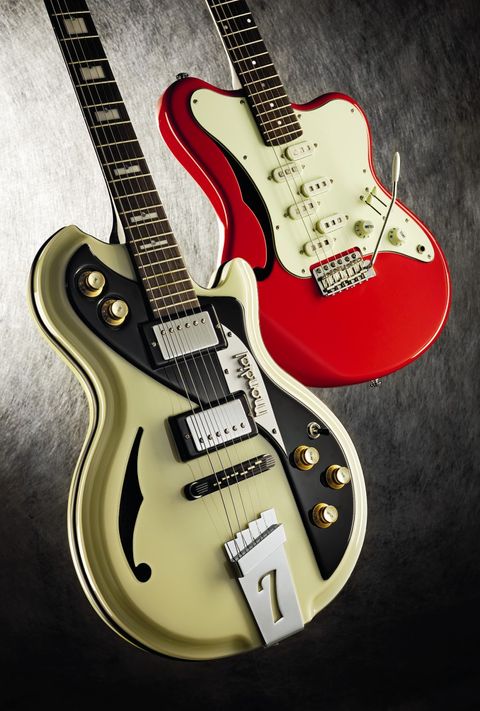 Introduced in 2000, Italia electrics employ design features filched from fifties/sixties originals, but update them where it matters - many oddball oldies were cheapies that looked much better than they played!

This modern retro brand is the brainchild of Trevor Wilkinson, the UK's leading guitar designer who's behind instruments bearing banners such as Fret-King, Maverick, Patrick Eggle, Hohner, Switch and, most recently, Vintage Advance.

This new six-string incorporates a number of innovative ideas, although in true Italia tradition, some are a case of 'second time around'.

Unlike its stablemates, the Imola's adequate back-angle eradicates the need for friction-inducing guides, while strings stay straight between the Italia branded Wilkinson EZ Lock tuners and graphite nut.

This fosters a more modern feel, as does the 12-inch radius rosewood fingerboard, and the outcome is easy playability, assisted by 22 sleekly finished medium frets.

Weight of the broad-waisted, offset body is more than the semisolid Korina construction might suggest, but it balances quite well, with a generous edge radius plus front and back contours keeping things comfortable.

Shallow cutaways don't do much for upper end access, although a curvy heel block makes life at the top a little easier. The high gloss fiesta redlike finish injects some Fender flavour, while the stretched soundhole provides a major focal point.

One side of its shape is supplied by the overlapping, sharp edge of the curvy scratchplate, which might injure fingers under severe strumming conditions.

Electrics include the Imola's most distinctive feature: three pickups, each split into two staggered sections. This busylooking line-up has appeared on some earlier six-strings, but the Italia's configuration is copped from the Japanese Teisco Spectrum 5 of the late sixties.

However, Wilkinson has reversed each twosome, with all treble halves now nearest the neck, although the Spectrum's distinctive square polepieces are present and correct.

One switch controls the top coils, the other the bottom coils, so you can have the neck pickup for the treble strings, and bridge for the bass strings, for example. Based on the standard Strat unit, the Wilkinson WVP vibrato incorporates some useful updates.

Topped with a stark white knob that contradicts the aged plastic employed elsewhere, the arm is a push-in type, with a plastic tension collar preventing a sloppy fit.

A quite resonant, mid-dominated tonality suggests the chambered body is doing its job, while the multi-coil concept proves very effective.

Despite the radically revised pickup layout, the five 'standard' selections are suitably Fender-ish via a well-balanced blend of depth and attacking twang.

The 20 additional aural options mix things up, ranging from wiry to woody, forky to funky and sweet to snappy.

Smoothly progressive pots also play their part and the tone control doesn't go muddy when backed off, introducing a much more practical mid-range character instead.

All selections sound impressive played clean, while many work equally well with the injection of extra amp gain, suiting this six-string to a wide variety of styles.

Both instruments combine vintage influenced visuals with modern performance in true Italia style. Impressive attention to detail at an attractive price, with no major construction, sound or playability problems.

The new Imola Standard is the more modern-orientated of the two, although its quirk content is still far from low.

Sonic versatility is second to none, but the switching system might take some mastering. The Mondial Classic has innate retro imagery and offers the bonus of piezopowered, pseudo acoustic sounds.

It certainly makes a very viable alternative to a far more expensive sixties Supro that's well past its sell-by date and wasn't very good from the start!

Strong character and high performance quality make both models prime contenders in the modern retro market. Anyone fancying vintage without tears or fears really should give the Italia range serious consideration.