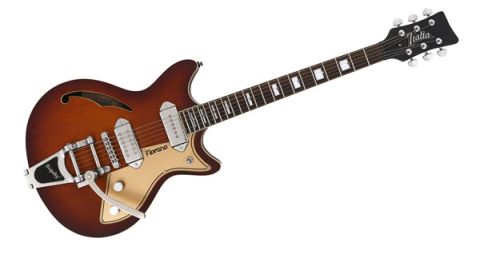 Italia has reimagined a classic-looking guitar for the modern age.

Brands such as Italia Guitars have a lot to thank Jack White for. Granted, he played the real vintage axes from the 50s and 60s, but considering you'd need to be as minted as Lord Sugar to own one (let alone a few like ol' Jack), offshore-constructed lines with modest price tags have surged in popularity. And Italia's Trevor Wilkinson-designed range continues to sell well.

On face value, the Fiorano has that old-school charm. Less is more? No, more is more! The headstock is exaggerated and curvy, while the tone dials and pickup selector are certainly on the larger end of the scale without detracting from the natural beauty of the instrument's plain mahogany body.

And, of course, the Bigsby vibrato tailpiece is just the icing on the cake, harking back to a time when skiffle probably sounded more like death metal.

The set maple neck is a one-size-fits-all affair; there's just enough wood to satisfy those who prefer something a bit more meaty, yet it's slim enough to suit beginners, too.

Coming out of the box, the action is low and the contour dead straight. It's a guitar that pretty much plays itself, making it perfect for beginners and veterans alike.

Even before you plug it in, there's a healthy amount of resonance, thanks to the semi-hollow chambered construction and shimmering natural acoustics.

Once amp'd up, however, the humbucking dual-coil Wilkinson Dog Ear at the bridge and single-coil Dog Ear at the neck provide a surprising amount of magnetic snarl.

The tone is bright, snappy and punchy, which definitely increases its versatility compared with pre-existing models. So, while it looks like the kind of guitar born for late-night blues jams or trashy indie rock, there's a bit more mileage this time round.

You could happily riff away with the likes of Hetfield and Mustaine, as well as Gary Moore or SRV. And jazz purists fret not, rolling back the volume and tone dials on the neck pickup will get you close to Wes Montgomery land.

The Bigsby vibrato functions exactly as you'd expect it to: tight and stiff for gentle shaking of chords. A Floyd Rose this ain't, so dive-bombing is (unsurprisingly) best left elsewhere.

Even so, the tuning stability feels a little temperamental, despite Italia's locking machine heads, so bear that in mind if you're partial to a good wobble-fest or two.

Overall, Italia has reimagined a classic-looking guitar for the modern age. Hollow-bodied electrics are prone to feedback in high-gain situations, but the new Fiorano fares better than most. It can handle everything that its predecessors did and way more.