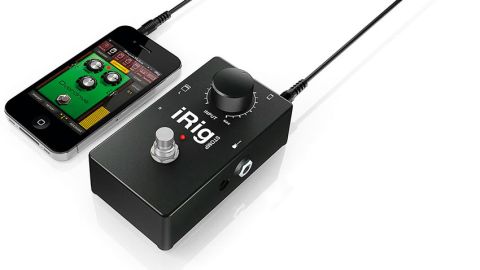 The iRig Stomp provides a solid connection without having to be right next to the iOS device, it's also the practical choice should you wish to use one as part of your signal chain.

IK Multimedia has made a move away from the pocket-sized form factor of most iOS input devices and placed its iRig interface into a standard stompbox housing that connects to your iPhone/iPad or iPod touch's headphone socket via a two-metre cable.

The pedal is powered by a battery or nine-volt adaptor and has a single knob to set the input gain to your app.

In common with some other input devices that use the headphone socket connection to iOS, IK's original iRig suffered from feedback when playing through high-gain amp sims, but the good news is that the iRig Stomp, courtesy of its active battery-powered output circuit, features noticeably improved headroom and suffers no such problems.

It's a robust device for plugging in for a spot of silent practice while listening through the mini-jack headphone output, but it can also be connected to an amp or monitoring system or even integrated into your pedal chain via its standard jack outputs.

The footswitch mutes the signal from the iOS device, allowing you to turn any sounds that you use on and off, just like a regular stompbox.