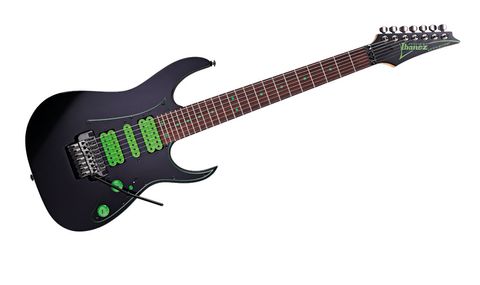 A must for Vai fans, the UV will effortlessly transport you back to the early 90s. Multi-coloured version next, please, Ibanez.

The new Ibanez Premium Series centres on the firm's core rock market with a range of guitars built in East Java, Indonesia. First up is a faithful take on the Steve Vai-developed Ibanez Universe 7, the UV70P.

As Paul Oldfield from Ibanez's UK distributors, Headstock, explains: "The quality and expertise that is associated with the Japanese-made Prestige series models has been utilised for the Premium Series guitars to create a more affordable instrument, but still with Prestige-style appointments."

The seven-string Ibanez Universe was originally launched back in 1990 with three colour schemes: black and green, white, and the most visually striking multi-coloured swirl.

Each of the latter models boasted unique patterns applied by artist Darren Johansen, and thanks to its appearance with Vai - both visually and sonically - on Whitesnake's huge-selling Slip Of The Tongue album and tour, not to mention his solo opus Passion And Warfare, it's arguably the most famous version. However, the fan- favourite remains the black and green, affectionately referred to as the 'Green Dot'.

"The UV70PBK is a tribute to the UV7BK from 1990," confirms Mike Taft, artist relations manager at Hoshino USA (the American arm of Ibanez's parent company).

"We constantly receive requests to release reissues of our older models, but we had the idea to release the UV70P in the Premium line to make the guitar more affordable."

On first impression, it appears very similar indeed to the original. The green of the pickguard, knobs and pickup bobbins seem a little more garish than we remember, but in appearance it remains a striking guitar.

The Wizard-7 neck measures 48mm (1.89 inches) at the nut in order to accommodate the extra low B string, and is composed of a five-piece sandwich of maple and walnut that's further reinforced with titanium rods.

The basswood body features the classic Vai-sized cutaways and is fitted with an Edge-Zero II double-locking whammy (Japanese Ibanez guitars usually feature the top-of-the- range Edge vibrato). It's loaded with a brace of Blaze pickups that are slighter cooler in output than the Evolution models DiMarzio still produces. They also feature on Vai's latest Japanese seven-string, the JEM 7V7, and the Blaze II was actually the model used on the original Universes.

The guitar sits nicely when strapped on, and although the neck is undeniably wide, its thin profile and flat radius shouldn't get in the way of the initial curveball thrown at your technique by that extra string.

It takes a bit of mental gear-shifting to get to grips with a seven-string, but compared with other models on the market, the UV is fairly restrained. While upping the amp gain and riffing on the low B is a rite of passage, the sound is nicely balanced and doesn't mush too nastily. Higher output pickups would possibly increase clarity for extreme metal, but single notes down low do sound good, as they do all over the fretboard.

Such is Vai's control as player, it might be assumed he uses a fairly low-gain tone. Don't believe a word of it: he likes it dirty, and the UV can deal with substantial levels of rock gain. It does clean up nicely, too, and any of the three settings that include the central single coil are perfect for glassy notes or trebly chordal passages.

Of course, the neck is wide, but it's more than playable and the only thing that will hold you back with the UV is you: a mantra Vai himself could perhaps have come up with after 10 days of fasting.