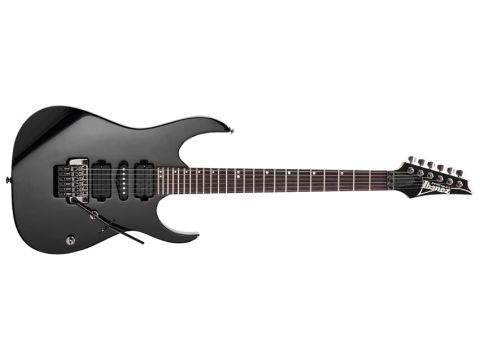 A genuinely impressive modern rock guitar, with a feel and tone that belies the rather attractive pricetag.

Ibanez can take a great deal of credit for reinvigorating the 1980s rock guitar market.

In 1986, Van Halen had parted company with original singer David Lee Roth, who immediately teamed up with another hot shot, a certain Steve Vai, to produce two albums of jaw-droppingly brilliant music.

The story of the development of Vai's then-new signature model, the JEM, has been told numerous times, but the knock-on effect was that other players wanted the same style of instrument.

Ibanez quickly realised this and within months of the introduction of the JEM777 in 1987, had also introduced the RG550, with four colour options that included both Desert Yellow and the newer Fire Alarm Red, alongside black and white.

Resetting the controls of our time machine to 2011, we welcome a trio of new Ibanez electrics - including this one, which forms part of a new affordable series. This is the most affordable model in the new Premium series, and is therefore best suited to demonstrate the thinking behind it.

"The concept of the Premium range was to bring high-end features and production methods into the price bracket of the normal gigging musician," says Chris Taylor of Ibanez's UK distributors, Headstock.

"Craftsmen from the Japanese Prestige production factory were used to implement the Premium production line in Indonesia to ensure that quality was of a high standard."

The DiMarzios are replaced with CAP-VM pickups designed by Ibanez using oxygen-free copper wire specifically for use with selected Premium instruments and the neck, although comprising the five-piece laminate, has a rosewood board with a slightly more curvy 400mm (15.75- inch) radius.

It does feel a bit fatter than the higher-priced RG3250's, and the smooth feel of the fret ends adds a true dollop of class.

Hardware is an obvious area from which to shave costs without necessarily impeding the performance, and the vibrato here is an Edge-Zero II, which is the cast rather than machined version of the full-spec Edge-Zero, and it operates in the same manner.

The marginally tighter radius allows for a more conventional feel and the fretwork is without doubt of the highest quality. In other words, the RG870 is a player's guitar and although the Edge-Zero II doesn't allow quite as much upwards play as the RG3250, the gamut of vibrato techniques are realistically attainable.

If anything, the tone is slightly fuller on this guitar - no doubt thanks to the bigger neck and slightly higher action - and is therefore a more versatile option. Rocking with AC/DC riffs sound more convincing here than they do with the RG3250.

So, admirable tonal versatility, excellent construction and a more than attractive SRP? Sign us up.

The RG870Z should have a wide appeal, retaining the luxurious feel of the high-end Prestige guitars at a significantly lower price and, aside from the pickups and hardware, we're hard pressed to spot where any cost-cutting measures have been made.

It offers the classic Ibanez feel without any over the top livery and, as a first proper rock guitar or even a quality spare, it'd serve you very well indeed.

Playing guitar is supposed to be fun, and you'll be grinning like a loon when you have this in your hands. Why not try it out and see what we mean?