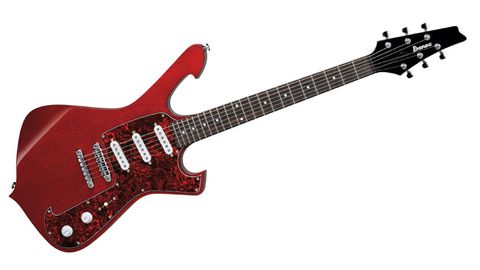 Make sure you audition one of the most intriguing shred guitars we've tried in a long time.

When hypersonic shred guru Paul Gilbert made noises about a new signature guitar, few of us imagined the result would be the Ibanez Fireman. An upside-down Iceman with a korina body, huge neck and three single-coil pickups didn't initially seem to tie in too well with the man who can blunt plectrums at an alarming rate.

It still did the business in the hands of Mr Gilbert, but for mere mortals, the guitar was a little pricey. We spotted the more affordable, mass-produced FRM100TR in a video for D'Addario's Injector pickups back in December 2010. Things went quiet until the 2012 Winter NAMM show, where the guitar finally surfaced once again, and we're itching to discover if it was worth the wait.

The FRM is faithful to the more expensive original, only here the body is made from mahogany, with a delicious Transparent Red finish. To look at, you'd assume it's not the most ergonomic design to play, but in use its quirky looks don't detract from playing comfort at all.

The three-piece mahogany and maple neck, while being slightly less immense than the original, is still a world away from the skinny RG necks Ibanez fans are used to. Give it a chance, though, because it plays like a dream, thanks to some skinny but tall medium frets that ensure easy string bends.

The FRM's three DiMarzio single-coils are all hum cancelling, and fend off excess noise well enough to be comparable with your average humbucker. The beefy Injectors have plenty of output and sound fantastic under distortion, as you'd hope. By turning down the tone pot, you can even get a more humbucker-like tonality without losing note separation and clarity.

Meanwhile, the Area 67 has a more vintage response, and the mixed pickup positions dramatically alter the character of the two Injectors. It's a wide range of sounds, but definitely not the norm when it comes to instrumental rock guitar. What you lose in outright grunt you make up for in definition, a key ingredient in Paul's punchy, percussive tone.

This is a true signature guitar - certainly a refreshing change from the practice of slightly warming over an existing production model. For fans of PG's tone it's a no-brainer, but others should think carefully about the kind of tone they're after.

The DiMarzio Injectors have won us over as a versatile set of pickups, responding beautifully to tone and volume adjustments and coping very well, even under highly saturated distortions. As a result, this axe is superb for cutting through the mix, especially if your other guitarist is using humbuckers.

Whatever your preconceptions about using single-coils for shred, you should leave them to one side and give this a go.