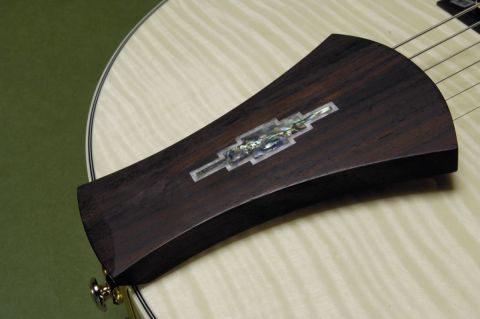 It may seem that we're down on the AF105: we're not. If you're in the market for a traditionally-sized single-cut box, then you shouldn't limit your search to this guitar but you may find that, unless you know exactly what you want, the slightly smaller dimensions and crystalline tone could be for you.

Most players are drawn to guitars they know the look of and, even when opting for models that don't demonstrate an obvious influence, will always describe their performance as, say, a little like a Les Paul, but a bit like a Telecaster too - it's all about familiar points of reference that most guitarists can quickly recognise.

And there are many very affordable brands that ape Gibson and Fender's famous solidbodies almost exactly, that are still just about playable even at the lowest ends of the market.

The same certainly isn't true of equitable semi-acoustic models and, if you've ever had the misfortune of trying to get a tune from a genuinely awful copy of an ES-335, ES-175 or whatever, you'll know exactly what we're trying to get across here.

The reason is that, to produce a semi of any worth, a specific amount of constructional know-how and, let's face it, skill is required - certainly when compared to bashing out a Telecaster - and this often costs money: costs that are, as ever, passed onto the consumer.

In cubic-volume terms, the bigger the guitar, the truer this becomes and, at the other end of the scale, models such as the Benedetto Manhattan are genuine works of art whose five-figure price pales when balanced with the sheer beauty of the playing experience.

The point is that, if you fancy a semi-acoustic that's not necessarily from the Gibson stable yet offers a solid guarantee of quality without the prospect of breaking the bank, Ibanez is a definite option to consider. Of course, these are far from the first semi-acoustics Ibanez has produced in its illustrious history.

The first so-called box guitar sporting the now famous name was the AM50, launched in 1982 and bearing an unsurprisingly close resemblance to a certain 'electric Spanish' guitar.

Current Ibanez models include contemporary versions of AM, AS and big-bodied AFS guitars amongst others, but there's no doubt the pale, all-maple look of these two bears little resemblance to anything we've seen from the company before.

The lineage of big hollowbodies such as this is significantly more established than that of most semi-acoustics and it's certainly worth mentioning that this AF105 is a fully hollow guitar: there's no centre block aside from a strip along the underside of the maple laminate top upon which to mount the pickups.

Much of the construction - the body and neck materials and all electrics - is the same as with the AS103, although the body is far deeper, at 70mm at the tailpiece. That said, this is still a less bulky guitar than, for example a Gibson L-5 that weighs in at over 85mm average depth.

One facet of the spec sheet that seems atypical is the lack of a spruce top. Classic Gibson single-cuts that also demonstrate the Venetian cutaway style such as the L-5, Super 400 and Wes Montgomery all demonstrate a solid spruce top that aids the overall resonance no end.

However, as arguably the finest of all Ibanez single-cut semis - the George Benson GB200 - also includes a maple top, Benson's own contention that this spec with the smaller body offers more articulation is good enough for us.

The neck joins the body at the 14th fret, so there's never any perception of feeling cramped by the neck and the rounder C-profile, when compared to the feel of the AS103, certainly gives the guitar a substantial feel without ever been too hefty.

We'd have expected a guitar such as this to have been strung out of the box with a stout set of strings complete with a wound third. Here, however, the guitar is strung with a standard set of 10s that, if nothing else, allows the novice jazzer to feel right at home.

As befits a big-bodied instrument, Ibanez has ensured that the AF105 offers a floating rosewood bridge base and beautifully inlaid rosewood VT04 tailpiece; if you'd like to go even more traditional, the third member of the family, the AF105F, features a single floating mini-humbucker.

You're immediately struck by the lack of depth to the basic clean sound. This isn't a criticism as such, but if you were expecting a traditional toast-warm jazz tone, the perceptible treble may put you off.

We, though, found the focused tone an easier animal to deal with than the sometimes overly woolly nature of similar instruments and we found that simply rolling off a third of the treble dispelled our woes at a stroke.

Sure, thicker strings (and possibly a spruce top) may well have upped the depth stakes somewhat, but at the price of general playability and, at this price bracket, we're happy to sacrifice what would be an improved jazz tone for ease of performance.