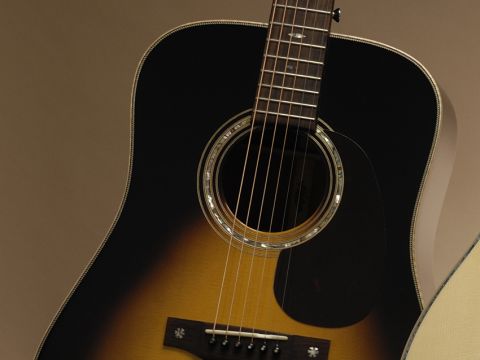 A slot-head, fingerstyle dreadnought well worth checking out.

The Hudson HDM-2 Vincent Fat Neck dreadnought is an interesting Martin-inspired amalgam. It has the familiar square-shouldered body profile, yet as its name suggests, the neck is a wide-ish, deep affair and is again topped by a slotted headstock.

Aside from it being 14 frets to the body, this is rather similar to the 12-fret necks that Martin used on its first long-bodied, round- shouldered dreadnoughts of the early '30s.

These guitars were themselves based on instruments Martin made for the Ditson Company during the previous decade.

The HDM-2P is sporting some deluxe cosmetic appointments. The neck's abalone position markers are again influenced by the early Style 45 guitars, and the body is sumptuously bound in flamed maple, all set off with a herringbone back centre strip and top purfling.

Counterpoints for the abalone rosette are a pretty torch motif on the slot headstock and a star inlay at either end of the bridge.

The amber area of the well graduated vintage sunburst spruce top reveals some rich cross-silking and the finishing is generally very good on the whole, save for a little roughness in the peghead slots - a difficult area to get right.

To its great credit - the Hudson is given a second strap button at the heel. This isn't a vintage requirement, of course, but it's a handy inclusion for sure.

Though dubbed 'Fat Neck', this is actually less of a handful than the Recording King ROS-626. It's similarly 'V'd in profile, but the nut span is only a semi-wide 44mm.

And while bridge string spacing and high-position depth are the same - 59.5mm and 25mm - it's shallower further down, offering a comfortable grip for general playing.

One minor issue to note is that the top E string path runs rather close to the fret ends at the first and second positions, prompting the occasional slip-over.

For punch, the guitar delivers as a decent dreadnought should, and the sound has a firm, warmish footing. Tonally, though, the response is a tad dry, and there's a hint of tightness in the sustain. Hopefully, further playing in will unlock more fluidity.

The standard of construction and presentation is commendably good, with very few cosmetic aspects that are below par. Indeed, taking its cue from the illustrious originals upon which it's based, the trim and finery displays excellent taste and conveys the vintage aura intended.

Value for money isn't an issue either, and don't forget that the Hudson includes a case in the price.

Compared with a normal peghead, changing a broken string mid-gig can be a pain but aesthetically, in ouropinion, slot-heads have few challengers on a vintage-style instrument. As for the sizeable neck: well, they go with the territory, and you're either a fan or not.

Sound-wise the guitar gives a good account of itself, even if it merits a little more openness, which should emerge over time.