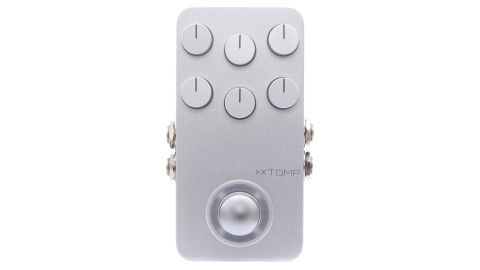 Many of us change our pedal setup on a regular basis and owning an Xtomp would enable that variety without any buying, selling or swapping of a physical pedal. The smart pedal has truly arrived.

The concept of the 'blank canvas' pedal, which can change to be any type of effect that you want, ought to be appealing, especially when it comes complete with the option of updating it with new downloadable effects.

However, when DigiTech offered this with its iStomp pedal back in 2012, it never really took off and was soon discontinued, perhaps partly because you had to buy effects individually (albeit fairly cheaply) and load them via a USB connection, making impromptu effects changes impractical.

Things move on, though, and now the idea has been dusted off by Hotone with its Xtomp. This time you get a large number of effects for free and can change them in an instant by zapping them in over Bluetooth from a phone or tablet, not unlike TC Electronic's implementation of TonePrint presets.

Digitally modelled effects stored on iOS and Android phone apps can be loaded into buffered memory on the pedal, which can hold about 300 effects; there's also a USB connection for future firmware updates, transferring effects and more.

At the time of launch, some 51 different effects were included with the free app, featuring 'combo' effects that put two types together, but Hotone's longer-term intention is to add more models. Several have already been introduced and the company tells us the Xtomp model library will soon have more than 300 classic tones online, as well as several new Hotone original design models.

With an iPhone-sized footprint, the Xtomp looks sleek, with six unmarked knobs, each surrounded by a glowing halo, colour-coded to show which is active. The knob assignments and colours are displayed in the Xtomp app and you also get reusable labels to attach to the pedal.

The free app is a doddle to use. You turn on the Xtomp and the Bluetooth on your device, choose an effect from the library, set bypass option (and trails for an ambient effect) and tap the 'Load To Device' button at the bottom of the screen.

The first time you load a new effect it takes at least 30 seconds (the most complex one we loaded took about two minutes), but the next time you call up a previously loaded effect with your device it loads instantly, offering the possibility that you could change the pedal's function between songs in a set if you don't mind fiddling with your phone.

Hotone has modelled a host of vintage effects - there are plenty in the overdrive/distortion/fuzz category including the familiar, such as a Tube Screamer and Big Muff, but also boutique stuff such as the Hermida Zendrive.

On top of these, you get a whole slew of modulation effects, delays and reverbs, plus various EQs, a compressor and others such as auto-wahs, octaver and acoustic simulator. There are also four cabinet simulations, which are useful if you need to send your pedal rig directly to a PA or perhaps for use with amp sims in the future. Right now, there's only a JCM800 emulation in terms of heads, and no 'combo' effects utilising that sim at the moment.

Overall, there are some excellent sounds in this pedal: Hotone's CDCM (Comprehensive Dynamic Circuit Modelling) has yielded very accurate-sounding emulations of many familiar pedals, as we discovered during our A/B testing of a vintage TS808 and CE-2 next to the Xtomp models.

The company's own creations are no slouches, either; the Trem Jet combines tremolo and flanger, and is particularly lush. What's more, with a single stomp, the 'combo' effects can give you a complex sound such as the Mag Hall, which combines a tape echo with hall reverb for instantly huge ambience.

A pedal that can be any effect you want is a brilliant concept: having one, or more, on your 'board could open up an enormously expanded set of sonic possibilities while saving space.

However, whether you'd want to be 'zapping' that pedal with your phone between songs when there are other important tasks (such as checking your tuning) to be undertaken is another matter.