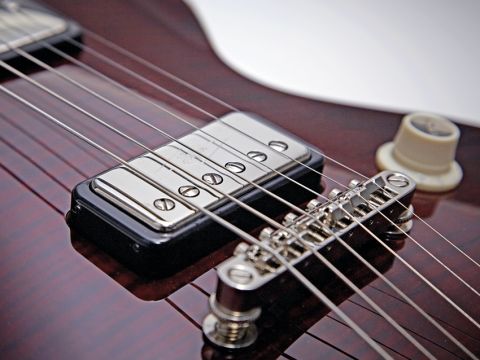 An affordable update that adds modern performance appeal to a distinctive, vintage-orientated image.

Introduced in 1957 and influenced by the Les Paul, the small-bodied, single-cutaway Club was Hofner's first purpose-built electric guitar, rather than an electrified equivalent of an existing acoustic.

However, the name came courtesy of the company's UK importer, Selmer, who decided this would provide a better identity than Hofner's anonymous numbering system.

"The neck position delivers some deep and snaky sounds, while the bridge offers extra focus via a more biting upper range and edgier bass."

The original Club series comprised the 40, 50 and 60 models, which were produced into the early '60s. The design made a brief comeback late in the decade as the 70, which represented Hofner's response to the Les Paul's revived popularity. Latest in this line is the Chinese-made Club Solid, which accordingly lacks the internal airspace of the original design.

The headstock looks suitably vintage and features an equally old-style, flowery motif, but this is contrasted by modern, metal-buttoned tuners. Topped by a very nicely cut nut, the bound and lightly radiused rosewood fingerboard offers a sleek playing surface that's matched by the 22 smoothly topped and tailed medium frets.

The position markers hark back to Hofner's past, being full-width and formed by contrasting coloured strips of plastic to create a striped look. The glued-in maple neck further enhances easy playability via a chunky but nicely proportioned 'C'-profile that sits well in the hand.

Maintaining the compact measurements that characterise the Club concept, the Solid model's air-less construction obviously places it much more firmly in Les Paul land. That said, Club styling incorporates a broadly rounded horn that sets this Hofner apart from many other similarly sized, singlecuts.

Mahogany makes up most of the chassis, topped by a curving spruce laminate front that features a fair degree of figuring that can be seen under the high gloss, black cherry finish that's contrasted only by cream edge binding.

Body depth and the shallow cutaway combine to restrict access to the upper end frets, but rear contouring adds some creature comforts. The latter also alleviates weight, although the Club Solid lives up to its name at a pretty meaty 4kg.

The absence of a pickguard is another update, but the twin Hofner Hi-Power pickups look very much part of the past. Complete with nickel-plated metal covers carrying the company's 'diamond' logo, these mini humbuckers sit in old-style small surrounds and, as before, they're secured by minuscule, side-mounted grub-screws.

The controls employ metal-topped knobs that replicate the originals first seen in the '60s and their straight-line layout also echoes some early Hofners. The adjacent pickup selector switch is conveniently positioned and safe from over-enthusiastic strumming. We get a volume for each and a master tone but each humbucker employs four-conductor cable, so coil-splitting is an easy mod.

The bridge is an obvious take on Gibson's tune-o-matic, but rather than the usual partner stud tailpiece, Hofner has opted for a trapeze-type, as on the original Club, that creates instant character in terms of looks and sound. In contrast, the output jack is located on a decidedly Les Paul-like plastic plate, but a metal equivalent would be more roadworthy.

There is an urgent acoustic response, with the trapeze tailpiece contributing to an airy and resonant sustain. Matching their Hi-Power designation, these Hofner humbuckers are louder than they look, although output is far from super-hot.

Both prove well balanced tonally, with a firm and woody low end partnering smooth mids and an expressively clear treble. The neck position delivers some deep and snaky sounds, while the bridge offers extra focus via a more biting upper range and edgier bass.

Unlike the airier Clubs, the Solid handles increased gain without any aural complaints, retaining good definition, an even response and improved feedback resistance.

This combination works well with rhythm work that spans grunty raunch to grungy thrash, while lead sounds are eminently suited to blues and rock. Versatility is increased via smoothly progressive pots that enable usefully subtle shifts in volume and tone.

Construction brings the Club Solid closer to Gibson's finest son, but a high quota of Hofner-specific features enhance character, keeping it well removed from being a mere Les Paul look-alike. However, this new Hofner is still obviously intended to contend in the highly competitive corner of the market occupied by cost-conscious Gibson copycats.

It does so via impressive build quality and equally able performance, but commercial success will be largely decided by personal preference regarding this instrument's inherent individuality.