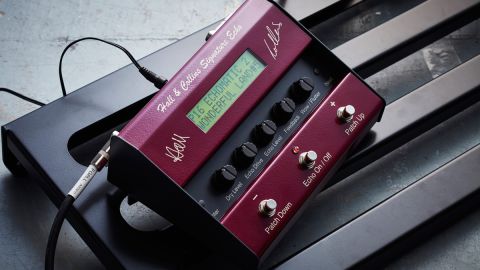 There are sounds here that you won't find in any other pedal, and they could be just as valid for the modern guitarist as they were for Hank all those years ago.

There are plenty of delay pedals out there that aim to emulate the sound of delay and echo units of years gone by.

Building a bit of degradation into the repeats or a touch of modulation to simulate the fluctuations of a moving tape is commonplace and can give you a flavour of that vintage sound.

Most supply equally-spaced repeats - which is fine if you are looking for the sound of an BBD-based analogue delay or an Echoplex-style single-head tape echo. Few address more complex multi-tap echoes, however: the sort of sounds achieved by an electro-mechanical tape or drum delay (such as a Binson Echorec) with multiple playback heads that aren't always equidistantly spaced, typified by the ambiences and rippling echoes made famous by The Shadows.

If those sounds interest you, your dreams may have just come true with the Hall & Collins Signature Echo. It not only delivers highly editable multi-tap echoes, but also accurately emulates several vintage units from the 1950s to the 1970s, including several variations of rare units such as the Meazzi Echomatic, the Vox Long Tom and the Binson Echorec 2.

Charlie Hall and John Collins are the men responsible for a pedal that they say represents the culmination of a project to emulate echo sounds to an accuracy that had never been reached with other effects processors. Charlie Hall may already be known to some readers for his Echoes From The Past series of patches for digital multi-tap delay units, from Alesis and Yamaha, and also for supplying echo patches to Hank Marvin himself.

What you get is a chunky and rock-solid mono pedal that features 64 preset patches and 64 user patches. A central footswitch turns the effect on and off while Patch Down and Patch Up footswitches to either side scroll through the patches and load them.

A large backlit display gives you the patch number, the model of echo unit emulated and a descriptive name. Some are named after representative songs. Many, unsurprisingly, are by The Shadows, plus a couple from U2 - flagging up that the unit can also deliver slightly more contemporary sounds. A row of five knobs allows instant tweaks of dry and echo sound levels, echo drive, feedback and simulated wow and flutter.

The first thing to note is that the pedal will alter your tone even when bypassed, but in a good way, as its preamp emulates the valves-working-hard sound of an old Meazzi Echomatic 2 echo.

It also has an analogue circuit that emulates the distortion and compression characteristics of tape-echo units very nicely. Now this is not like a delay pedal where you just turn the delay time up or down: the sounds and the often distinct pattern of repeats of vintage echo units are determined by the number of heads, their distance apart, the speed of the tape (or rotating drum), the relative playback volume of each head and the amount of feedback (often different for individual heads), and the pedal offers parameter editing that takes all of that into account.

So, you get up to six 'playback heads' in each patch and can set the timings between them to a resolution of 0.1ms. Charlie Hall's research has ensured that he has got the timing, volume and feedback of the repeats for the emulated machines spot-on, and they sound excellent. There's plenty of potential to create your own sounds, too, be they complex multi-tap echoes or more simple stuff.

Be aware, though, that the editing methodology may seem a little 1980s and clunky to anyone used to a data dial or software editor.

Let's face it, this is a specialist unit. For just shy of 600 notes, it's not going to appeal to the casual delay user, but that doesn't mean that it's just a toy for wealthy Shadows fans. While it's true that anyone who has listened to a Shadows recording and marvelled at the echo will love this - grab a Strat and a Vox amp and there's the sound for each song at the press of a footswitch - it goes way beyond that.

What this offers is not only an entry into the arcane world of vintage echo units, all reproduced here with scrupulous attention to detail, but also the potential to create your own pattern of repeats for something new and individual.