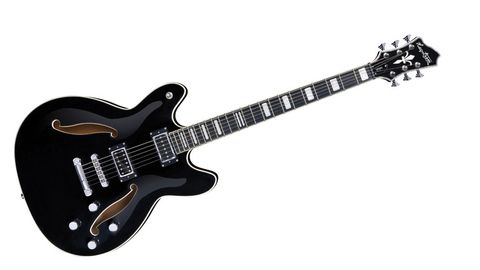 The Viking Baritone opens up whole new avenues to your playing and songwriting for a very reasonable price.

There are two flavours of baritone guitar in common use: one equipped with single coils for surf music fans, and one loaded with high-output humbuckers, aimed at the discerning rocker.

Both make a bold statement and, as such, the baritone can sometimes be overlooked. That's a real shame in our opinion, and Hagstrom seems to agree: its new Viking Baritone model aims to bridge the gap by mixing a P-90-style single coil with a humbucker.

Like the other Vikings aboard the Hagstrom longboat, the Baritone features a semi-hollow body. The flamed maple top may be a veneer, but the Cosmic Black Burst finish is pure class.

In fact, the controls are the only sign of the guitar's budget leanings, with the pickup selector and pots feeling a tad flimsy compared with the rock-solid tuners and fixed bridge. The 711mm (28-inch) scale length is closer to a Strat than a P-Bass, but still takes some adjustment when you play it for the first time.

Hagstrom has developed two new pickups to offer as many tones as possible. The P-Urified P-90-style neck pickup fits into a humbucker-sized cavity, which means that, should the Viking's single-coil tones not be to your liking, you can easily swap the pickup out for a humbucker.

Metalheads shouldn't go reaching for the soldering iron yet, though, because the P-Urifier's tones offer a voice that any gain addict can appreciate. It's a thicker, raunchier tone than your average single coil, and manages to avoid becoming woolly or indistinct, and pairs nicely with the raw bite of the 'bucker.

Played clean, it's rich and soulful, especially when sitting on edge-of-breakup valve tones. Distorted, there's a low-end resonance that snarls as you introduce more gain, and it's easy to see why the Foo Fighters' Pat Smear keeps a Hagstrom Baritone in his arsenal. You don't get the top-end crunch of the humbucker, but it's not a question of clarity - it's simply a different voice.

The Custom 58B humbucker has been developed to enhance the acoustic qualities of the Viking's body, which Hagstrom claims adds sustain and clarity. Notes ring out with plenty of definition, but the excellent fretwork and setup are just as important to this guitar's distinctive voice.

While it caters for high-gain tones admirably, we're equally impressed with how well it copes with classic crunch and bright, crisp cleans.

It's not easy to pick faults with this Viking. If you don't want to be pinned down to one particular set of sounds, this is the one to beat.