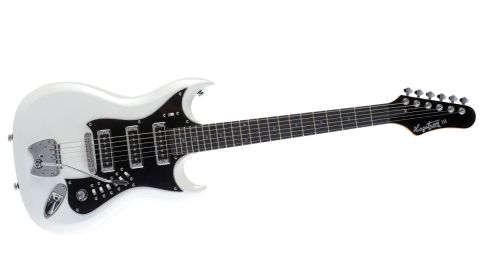 A superbly-retro guitar that comes with its fair share of quirks.

The original Swedish- crafted Hagstrom guitars that were made between the late 50s and early 80s attract quite a cult following - plenty of big name players have used 'em over the years, too.

Indeed, an H-III similar to the one we have on test here was the start-up guitar for shredder Joe Satriani, while Pat Smear would loan his trusty H-IIs and H-IIIs to Kurt Cobain during his Nirvana days. Now with the Foo Fighters, Pat has his own Hagstrom signature model these days, and is a big collector of the old Swedish models.

When production was restarted in 2005 with a small range of Chinese-made electrics it didn't please the collectors and Swedish Hag-o-philes, but for the rest of us there is plenty to enjoy with oodles of original Hagstrom vibe.

Among eight mini-ranges, the RetroScape range ('A landscape or setting filled with things from the past', says Hagstrom) is where you'll find the Impala and Condor, along with our more conventional H-III (and the twin-pickup H-II). It's like a cross between a Gibson SG and a Fender Strat - the former in the chamfered edges and pointed horns of the body and the latter with its bolt-on neck, trio of single coils and, of course, a vibrato.

But while Fender and Gibson's control layouts are now virtually generic setups, Hagstrom's designers back in the day thought it'd be a great idea to use a multitude of switches to not only voice the pickups but to add some passive tone-mangling, too.

The 'Strat in Gibson clothes' vibe continues with a shorter Gibson scale length. The neck employs  a modern version of Hagstrom's H-Expander truss rod (highly regarded, by the way, for the way it prevents the neck from twisting), its back is quite heavily glossed while the fingerboard is what Hagstrom calls Resinator (a synthetic substance that we suspect is similar to the Richlite used by Godin and Martin, for example).

The black-faced Fender-y headstock is back-angled more like a Gibson, and the generic tuners at least have a Hagstrom logo and distinctively shaped buttons, while the logo is a moulded and silvered plastic.

Along with a new version of Hagstrom's Tremar vibrato (and a roller-saddle tune-o-matic), the H-III's major calling card is the plethora of switches. All in all, it might have been conceived in the 60s as a Swedish 'Strat' but from a modern perspective it's quite a slice of retro.

Mind you, a quick unplugged strum doesn't bode too well, with a rather plunky, quick decaying tone - not a million miles away from a Jaguar. Our problems don't stop there. Each of the three single coils have the same output, and the bridge unit is some way from the strings. Again, though that's easy enough to sort with a screwdriver, the bridge still does sound a little thin. But with all the tone mod switches bypassed, it's a credible bright and quite attacking Stratty sound, plus we can voice all three pickups together and get a Tele- like bridge and neck combination.

The volume features an R/C network (a resistor and capacitor) to retain highs as you roll it down, but it has quite a slow taper, unlike the much faster attenuation of our reference Fender Strat.

The master tone switch is like turning a conventional tone control pretty much fully off, while the mute switch is like a tone control just knocked back a little - the latter working especially well to round out the inherent spiky sound with some classic Marshall-like gain. Kicking in some punkier fuzz and that Top bass-cut switch produces a really nasty wiry bridge pickup sound.

It all plays pretty well even though the Tremar does feel quite stiff - not as smooth as a Bigsby. While the H-III really suits a pedalboard setup with different overdrives and the like, plugged straight into a small Vox AC10 we get a pretty characterful early electric blues sound with ease. Far from daft.

Is the H-III a great guitar? No, aside from the two extra pickup combinations, it's like a Strat with preset tones controls - and a handy kill switch. But where it scores is how it wants to take us on a different sonic path - one that might be less clichéd classic Strat but sounds near-perfect for punkier, thrashier styles or, in contrast, really old lo-fi blues.