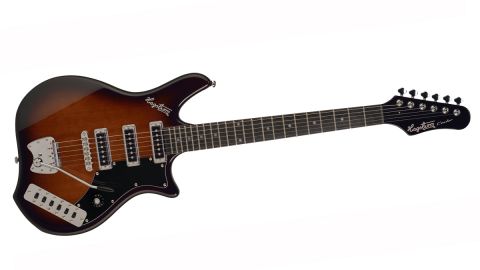 In terms of build quality, sounds and playability, the Condor is up there in the retro guitar pecking order.

The condor is a big feathery vulture thing that conducts its business in South America.

The Hagström Condor, on the other hand, is a reissue of a guitar launched by the Swedish manufacturer as the Corvette back in 1963. You don't ever want to get the two confused.

We should point out that any bird-related puns that follow are made possible thanks to Hagstrom renaming its orignal Corvette model the 'Condor' for the US market in the 60s, probably because Gretsch already produced its own Corvette-tagged model at the time.

Like its vintage predecessor, the reissue Restroscape Condor comes across a bit like a Gibson SG wearing a Stratocaster costume. The mahogany body features a glued-in mahogany neck with a 629mm (24.75-inch) scale length like the SG, while the pickup layout and six-in-line tuners have a Strat vibe.

In fact, the original Corvette/Condor's headstock looked remarkably close to that of a Strat, and it's no surprise that this has been tweaked into a less controversial shape for the reissue.

Rattling through the spec sheet, the three Retro-S alnico V-loaded single-coil pickups are wired to a master volume, and the six-switch chrome panel that dominates the guitar's lower bout. More on the latter in a moment. The remainder of the Condor's shiny plumage consists of an old-school Tremar vibrato teamed with a tune-o-matic bridge, with roller saddles, anchored to the guitar's body.

If the neck was on an internet dating site, it would likely describe itself as 'more to love'. It's a nice palmful, easy to get on with, and should hit it off with most guitarists. In classic Hagstrom fashion the fingerboard is made from Resinator, a tough wood composite material with some of the looks and sonic properties of ebony.

The 'board is stamped with 22 medium jumbo frets, profiled with a 381mm (15-inch) radius - way flatter than Fender and Gibson guitars - and finished with a perfectly cut Graph Tech Black Tusq XL top nut.

Playability is perfect, with no buzzing or choking during string bends anywhere on the fingerboard. The Tremar vibrato provides a retro shimmer - more wobbly Hank Marvin than dive-bombing Eddie Van Halen - and returns to pitch every time.

Great, we hear you crow... but what about those switches? Well, you get an on/off slider switch for each pickup. That means you can engage one, two or all three pickups at once, so this is a versatile guitar. The remaining trio of sliders offer tone manipulation: 'master tone on/off', 'bass cut' and 'mute'.

As its name suggests, bass cut sucks the bottom-end from the tone and reveals some icy treble. This is your classic 60s spy/surf guitar sound when you run the bridge pickup on its own. In the other positions, it allows the guitar to cut through, adding great string separation and clarity to overdriven and distorted stuff.

You might think that mute cuts the signal completely. Actually, it's more like a trumpet mute, muffling the top end and cutting the volume. This works best when comping jazzy rhythm chords, but it's a little dark and muddy for anything else.

Master tone on/off fattens up whatever pickup selection is engaged at the time, and conversely leaves it sounding a bit flat when it's in the off position.

As cool as a bank of switches looks, how many of us actually use the tone controls on our guitars? The novelty of the tone sliders may wear off, but the sound of those single coils will endure. They're bright and clear for country, blues, and other roots endeavours, yet they possess more than enough output for rock and metal, even if the guitar looks a bit demure for the heavy brigade.

The South American Condor comes with a pretty big bill. With its SRP of £619, our reissue Hagstrom doesn't. You're getting a lot of guitar for your money, even if the tone switches are more gimmicky than essential.

The pickup switches, on the other hand, are one of this guitar's big selling points. There are some great pickup combinations at your disposal, and you'll likely find some tones you haven't encountered before.