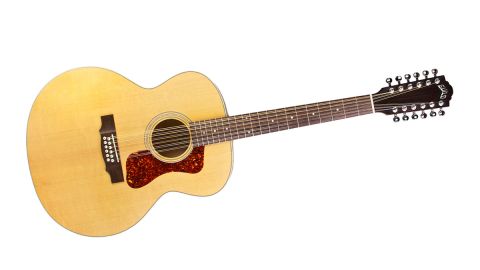 This is a niche instrument that isn't going to be an everyday guitar for most people, but the price means that it could finally tip the balance for those who've always wanted to try a 12-string.

It's said that everyone should play a 12-string at least once - there's pedals and Nashville tuning that will kind of get you in the ballpark but nothing rivals the real deal, and the glorious harmonic chime it brings.

And of course, Hotel California's intro is the mother of 12-string songs, so obviously its the first thing we play.

With that out the way, it's time to take stock. Because Guild is a brand that has a reputation for jumbo 12-strings, but this is its most affordable yet; expectation weighs heavy.

It's certainly a looker - the maple is clean and eye-catching.

Newcomers to 12s will be a little bewildered at first by the string spacing when they pick this up, and it'll take some time but it's pretty straightforward to tune in principle; the third to sixth stings are each paired by one an octave higher but just need to be tuned as you normally would (two Es, two As, and so on).

Yes, it takes twice as long but you're rewarded with a lush shimmering phasing sound that's full of resonance. Arpeggios are a real treat here, with a rich tonality that's well- balanced across the spectrum.

Plugging in reveals the F2512-E to have the most resonant top for percussive playing (indeed John Butler utilises a 12-string guitar with the G strings removed for his signature instrumental track, Ocean) and the chorus-like nature of the tone does seem to work pretty well with the AP-1 piezo here without sounding harsh.