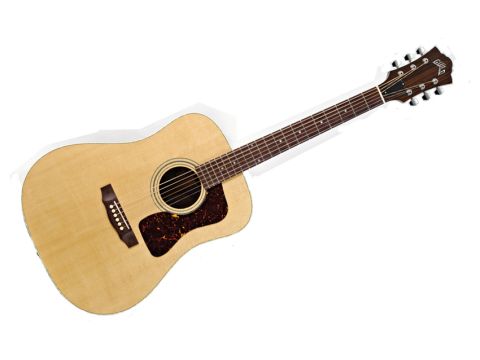 Come 2010, the range has moved up a gear with the launch of the six-strong Guild Standard Series. These instruments are 'streamlined' or stripped- down versions of Traditional Series guitars, enabling more affordable prices. Cutaway electro versions of each are due this year.

The OM-size F-30 dates back to Guild's very early days in 1954, but a rosewood-backed version didn't appear until 1967, as an exclusive made over a six-year period for Paul Simon. Regular F-30R production started in 1973, thereafter dropping in and out of the catalogue until it was discontinued in 2001, when Guild's Rhode Island factory closed.

The bridge has a faitly traditional belly design, with Sitka spruce/rosewood trim. The body binding and heel cap are ivoroid, and the finish is a combination of gloss body and satin neck. There's also a wood-mosaic centre strip down the back.

The presentation is exemplary, and the top looks of the highest quality, with cross-silking and graining that, in the accepted manner, becomes progressively tighter towards the centre of the table.

Build-wise, befitting an OM's popularity as a picker, its span is a broad 44.5mm across the nut, with commensurately airy string spacing, though bridge spacing remains 55mm, which is perfectly adequate for accurate fingerstyle.

The shallowish profile - of pretty much constant depth all the way up - also has just a hint of a 'D' along the shoulders, giving an obliging and slick grip. Our sample's set-up and fret dressing are excellent.

The smaller-bodied F-30R understandably lacks some of the volume and projecting poke of a dreadnought, but it's by no means a slouch in OM terms.

The sustainfully vibrant tone is warm and fluid, with silkily sunny highs, and the whole sound displays a delightfully smooth poise and articulation whether strumming or picking. Try it with various tunings - especially drop D or open G - and the guitar positively sings, making it an engaging and highly enjoyable player.

'Standard' could be interpreted as meaning 'adequate', but that's far from the case heres. Okay, it lacks a few Traditional Series features, but these are essentially cosmetic and don't detract one iota from them being great-sounding acoustics, simply yet elegantly styled, and crafted to a very high standard.

The 30-R earns its stripes as a great guitar, amply demonstrating that in no way is Guild letting its, er, standards slip. Indeed, it's very much the opposite.