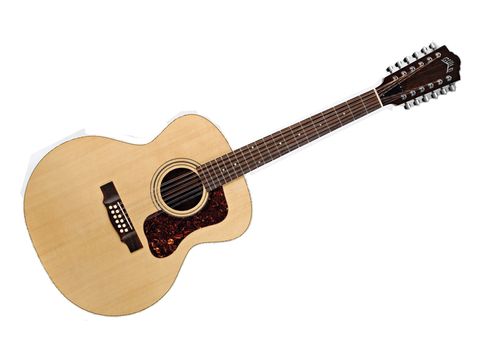 Super-jumbos 12s are rare around this price point, and this one's a stunner.

Come 2011, the range has moved up a gear with the launch of the six-strong Guild Standard Series. These instruments are 'streamlined' or stripped- down versions of Traditional Series guitars, enabling more affordable prices. Cutaway electro versions of each are due this year.

It in effect returned as a JF-212XL incarnation from 1989 to 1994, then was given a reprise under its original moniker in 1999, remaining in the catalogue until it was phased out in 2001 with Guild's Rhode Island factory closure.

The nearest comparable super-jumbo 12 in the Traditional Series is the F-412, though with its deluxe appointments and figured maple back and sides, it's rather pricier.

Describing the F-212XL Std as a super-jumbo is no exaggeration. Like its near-eponymous forebears, the span across the lower bouts of the spruce/mahogany body is only a gnat's short of 438mm, while the maximum rim depth is a generous 120mm.

Make no mistake: this is a big acoustic, and the 12-string neck, with its long headstock, does nothing to lessen the impression.

Happily, one upside of the overall bulk is that the guitar is only slightly neck- heavy, whereas some 12s can be quite noticeably so.

Size and 12-string format aside, the F-212XL Std, in cosmetic terms, is like the D-40 Std revisited - it has a larger, double-pinned bridge, of course, but otherwise the trim, finish and hardware are essentially identical, save for the peghead necessarily toting mini as opposed to full-sized Gotoh tuners.

The neck configuration is generally as one would expect. A span across the nut of 47mm is par for flat-top 12-strings and not too arduous, while a bridge string spacing of 63mm allows clearly defined physical separation between the strings' double courses, which helps to avoid muddled picking.

As for depth, Guild may well have slimmed down the profile compared with previous-generation F-212XLs, but since we don't have one of those handy, it's impossible to say for certain.

What can be observed is that a section that graduates from 23mm to 25mm may be regarded by some players as slightly on the full side, particularly under higher positions, though the evenly rounded 'C' profile does help to minimise any undue sense of bulk along the shoulders.

Notwithstanding, we'd prefer things a millimetre or so shallower, though we do concede that this may not represent a majority view. One thing's for sure, though: Guild's again impeccable, low action set-up does greatly aid playability in absolute terms.

Despite their cavernous soundboxes, super-jumbo 12s don't always live up to expectations. This Guild, however, very much does.

A steroidal, warm-throated, long- sustaining jangle leaps from the instrument, projecting like a good 'un to deliver a fabulous all-enveloping sound.

Naturally, the dominant timbre is brightness, but an underlying richness comes through too, offering a fine blend of interweaving textures. It's truly excellent.

'Standard' could be interpreted as meaning 'adequate', but that's far from the case here. Okay, it lacks a few Traditional Series features. These are essentially cosmetic, however, and don't detract one iota from it being a great-sounding acoustic, simply yet elegantly styled, and crafted to a very high standard.

Despite its slightly chunky neck, the F-212XL Std boasts a beautifully free-flowing, lustrous jangle, and amply demonstrates that in no way is Guild letting its, er, standards slip. Indeed it's very much the opposite.

Hear the F-212XL Std in action