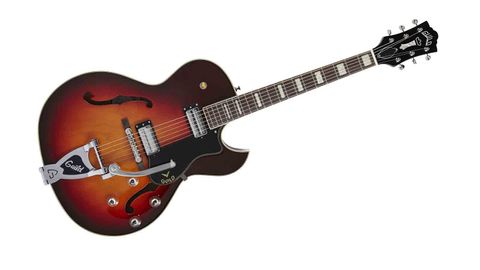 Guild's version of the ES-175 takes you from jazz to way beyond. With aggressive street pricing, it's hard not to like.

Although a limited number of Guild electrics are made in the USA, with appropriately high prices, the main thrust of its 2013 electric return comes in the form of the Newark St Collection, designed in the USA but made in Korea. With the addition of the 2014 CE-100D Capri with Bigsby reviewed here, the range now sports three Starfires, single- and double-cutaways, the jazzier Venetian cutaway Manhatten and Savoy hollowbodies, the smaller M-75 Aristocrat and a pair of basses.

The hollowbody Capri is effectively a deep-body version of the thinline Starfire III. The 1956 Capri CE-100 was the brand's first sharp-pointed 'Florentine' cutaway guitar, although it retained its jazz-era roots with a single neck pickup (the dual-pickup version appeared in 1959), archtop-like wooden bridge and deep body.

At just over 413mm (16 inches) wide, the Capri takes its style from the ES-175, Gibson's first Florentine cutaway electric, that debuted in 1949. Construction is pretty similar: the all-laminate (maple) build is extremely clean - internally kerfed linings join the top and back to the sides and the top is braced with two chunky, longitudinal bars.

There are no figured outer veneers - the top has a dark brown sunburst, the back and sides a deep brown 'mahogany' colouration. Weight isn't excessive, and played seated it's a remarkably comfortable design. The onboard Bigsby isn't a jazz standard, and moves the Starfire design into a more Grestch-y area - including the unpinned wooden foot tune-o-matic-style bridge.

There's a high level of vintage-like detail, however, from the Grover Sta-Tite open-backed tuners on the centre-raised 60s-style headstock, with its 'Chesterfield' inlay to the period correct clear amber control knobs - each with a pin marker.

The pickups here replicate the early-60s introduced 'Anti Hum Pickups', and wouldn't have graced the earliest Capris, but controls are Gibson-standard with a shoulder-placed three-way toggle and individual pickup volume and tone controls.

The guitar feels classic; it is set up to a high standard, and plays superbly. Sound-wise, the Capri drops right into the 50s and 60s. These pickups, especially the bridge, sound very much like single coils, and the bright rockabilly attack of the bridge is quite a contrast to the more humbucking-like, jazzier neck.

With both pickups on, you can't help but slip into a duck walk or peel off early Stones, Beatles and Kinks licks. Adding a little grit takes us to Chicago, then on to Eel Pie Island, stopping off at Olympic Studios.

It's drenched in the evocative history of jazz, blues, rock 'n' roll and soul, which still forms the cornerstone of many modern bands. Of course, it's a deep hollowbody, so stage volume may cause problems.

There really is no shortage of semis to choose from, but Guild's heritage is quite a draw: the lesser- known 'new' boys to Gibson and even Epiphone's more stately pasts give a real feel of 60s modernism: the change from the jazz era to new rock 'n' roll and pop and the first golden age of the electric guitar.

We'd happily use the Capri for recording and small ensemble gigs and, with attractive street pricing, you could buy this and the new Bigsby-equipped Guild Starfire V for less than a new basic Gibson ES-335. Food for thought?