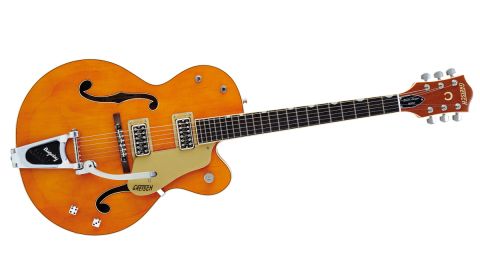 Gretsch guitars have always been premium instruments and this Japanese version is no different.

Brian Setzer has been associated with Gretsch guitars throughout his long and illustrious career. Taking on the mantle of a latter-day Eddie Cochran, his use of primarily orange 6120 models helped reinforce the identity of Gretsch as the instrument of rockabilly.

He and his band, The Stray Cats, also set a fire under a thousand cool cats who wanted to keep this exciting rock 'n' roll sub-genre alive and kicking. There have been various Gretsch Setzer models for years - who doesn't recognise the tell-tale 'dice' control knobs? But the latest clutch comes with several cool upgrades, making them some of the most interesting yet to emerge from the brand.

Essentially split into two, the range offers 'full fat' in the form of the Nashville (reviewed here), with two pickups and the usual bristling complement of electronic switchery, and 'stripped down' as in the Hot Rod - still with twin power-plants but armed only with pickup selector and master volume.

The Nashville, in classic 6120 livery, looks the part right out of its plush-lined case. Its nitro lacquer looks glossy but not overly so, while the finish itself appears to be thinly applied and is flawless all over. The all-hollow body is built from maple throughout, with five-ply arched back and front bound in black and cream, and oversized bound f-holes.

While not figured, the transparent finish reveals a pleasing grain with minor swirls and patches of dark and light that keep things looking interesting.

A two-piece neck (five, if you count the dark centre strip and two added-on headstock 'wings') carries a fingerboard of pitch-black ebony, edged in cream, and with Gretsch's distinctive 'thumbnail' position markers and 22 medium-gauge frets. A Setzer-badged truss rod cover, horseshoe inlay and 'T-roof ' Gretsch logo, plus Brian's signature between the Schaller locking tuners on the rear of the headstock, complete the picture.

The top features Gretsch's 1959- style 'trestle' bracing. In the late 50s, as a direct response to Chet Atkins' request for a guitar with better feedback resistance and superior sustain, Gretsch developed a pair of U-shaped braces that run parallel to each other, a few inches apart down the centre of the body.

Offering infinitely greater mass than the company's soundpost arrangement (essentially simple dowels bridging front and back), the trestle bracing system adds mass and rigidity as it connects the top to the back, between neck block and bridge, and in so doing enhances the guitars' stability at high volumes. This bracing system is only available on certain Gretsch models, including all the Setzer- branded guitars.

Hardware includes the black-painted 'flat handle' Bigsby B6CB vibrato and an Adjusto-Matic bridge with its rosewood foot pinned to the top for intonation stability. Also loaded on the Nashville are Schaller locking tuners and Strap-Loks.

It also comes with new Filter'Tron-style humbuckers from TV Jones. The story goes that while on tour, Setzer's guitars seemed to be sounding better and better. Setzer finally learned that Jones had been working on vintage- toned pickup upgrades and had secretly fitted them to his stage guitars.

When the truth was revealed the two agreed to create TV Jones's first ever artist pickup, the Brian Setzer Signature. Jones says the coils are wound asymmetrically in each bobbin - one dark, the other bright - and this provides sparkle while maintaining the low-end growl for which this pickup style is renowned. The neck and bridge pickups are also dissimilar in output - the neck a mellow 4.5kohm DC resistance and the bridge a beefier 6.3k. Jones reckons they flourish under distortion, with a tight bass and shimmering highs.

Vintage Gretsch guitars were lightly built and often suffered from playability issues, including fingerboard turn-upsand unstable neck joints. Today's guitars are an entirely different kettle of fish: they invariably have great necks and play like a dream - like modern instruments instead of something from a bygone era. This guitar is no different.

The Nashville features what might best be described as 'shallow C meets shallow V' profiles. With the same 241mm (9.5-inch) fingerboard radius as many modern Fenders, the compromise is perfect for easy chording - a staple of rockabilly - and fluid leads. While heavy string bending was less prevalent in Cliff Gallup and Eddie Cochran's time, Setzer is a no-holds-barred soloist and the Nashville responds effortlessly here, too.

What non-Gretsch players might find takes a bit of getting used to is the control setup, especially the master volume sited on the horn adjacent to the cutaway. Anyone used to Gibsons or Fenders will find it counter-intuitive to put their arm across the strings to adjust it - not only can shirt or jacket sleeves get in the way, but also your picking hand is put momentarily out of action. Having used a 6120 on stage for two tours, this reviewer can attest that you get used to it-but it can be a steep learning curve.

Another idiosyncrasy of archtop guitars, in general, is the lack of access to upper frets. Anything past shape 2 of the E minor pentatonic at the 15th to 17th frets is a no-go area. That said, you don't buy a Gretsch for Steve Vai-style excursions, so no rockabilly player will give it a second thought.

More quirkiness is revealed on plugging in. With the Nashville's regular switching setup, the toggle nearest the end of the fretboard is a regular three-way pickup selector, while the adjacent switch offers three tone presets. In the centre position it's out of circuit, so the tone is always wide open whichever pickup is on. The two other settings offer a mild and a slightly more radical high-frequency roll-off.

You quickly get used to using the guitar in this way and, while centre position is where all the classic sparkling Gretsch tones are (on every pickup with varying degrees of body), you can go from gutsy bridge-pickup honk to neck pickup jazziness in the flick of a switch, literally.