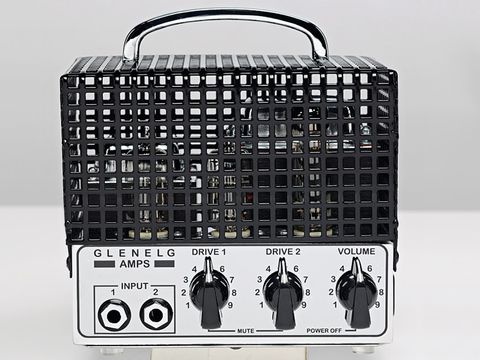 A decent first effort from these amp newcomers; far from perfect but cool for powerful valve sounds on the move.

Glenelg Amps is the brainchild of Glasgow-based engineer Mark Andrews. Andrews set about designing the T6A10, Glenelg's first production model, in 2009 before wrapping up completion of the unit earlier this year.

Glenelg's maxim is "Small amps with a big sound". This amp is certainly dinky, so let's see about that sound…

On the front panel there are two inputs, two gain controls, and a single master volume. Inside, you'll find a pair of ECC83 valves and one 6BM8 giving you six watts of output power.

With the gain at '3' and level at halfway, you'll achieve a great chiming, singlecoil sound, but because of its low output, headroom is fairly limited. Upping the levels and switching to humbuckers introduces a pure, overdriven rock 'n' roll tone - you'll be surprised at just how saturated this amp can get.

However, our model did emit a mains hum, even at low levels. While Glenelg explains that this is because of the tight spacing of the components, it's something to bear in mind if you plan on using the T6A10 for recording.

Another notable point is that there's no tone control, so you'll need to control your tone from your guitar or use an EQ pedal.

While it isn't going to compete with a loud backline, the pint-sized T6A10 is still likely to earn you an ASBO if you crank it up at home. The noise issue and lack of tone control could be potential deal-breakers for some, but this is a worthwhile first effort from newcomer Glenelg.