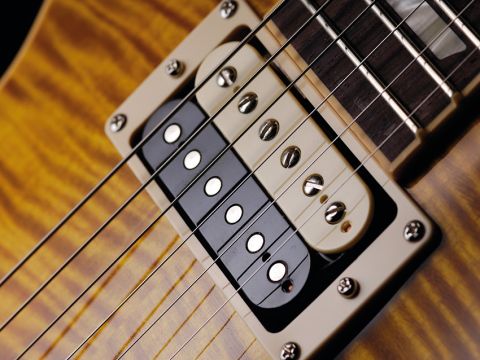 A lovely vintage-inspired Les Paul with the gentlest of nods to modernity. But will it be more often collected and stored than played though?

Guitarist holds Mr Slash in extremely high regard, in fact he topped our 100 Best Guitar Things Of The Last 25 Years in issue 323. There's no doubt that his playing on Guns N' Roses seminal 1987 debut Appetite For Destruction reinvented rock guitar for a whole generation. The principle guitar used on the record, however, has been the subject of much debate and controversy. So is this new signature a copy of a copy? Well, sort of…

Whatever the history, the Slash Appetite Les Paul is Gibson's nod to the main man's achievements in those heady days. Originally limited to just 600 worldwide, Gibson announced at Frankfurt Musikmesse that it is now making more (we were told at least another 600). Either way, with only a fraction of those numbers coming to the UK, it's still a collectable instrument if that's your interest. Let's see if that investment is justified.

The Appetite Les Paul finds itself based loosely around the fabled '59 with general 1958-60 styling, AAA flame maple cap and choice of hardware and parts.

It's positively feather-like for an LP at 8.9lbs; indeed 'optimum' Les Paul weight is considered to be between 8 and 9lbs and it's achieved in this case with Gibson's long-used 'traditional weight relieving' process - in other words, the 'Swiss cheese' approach of drilling holes in the mahogany back to reduce mass, then covering it with the maple cap.

It's not chambering in any structured sense and Gibson maintains it has negligible effect on tone. For context, neither modern Gibson Reissues nor the original 'Bursts are weight relieved or chambered in any way.

The nitro-cellulose finish has that unmistakable sheen that looks so much less 'polished glass' than more modern poly coats, and the sole finish option is Appetite Amber, suggesting an 'unburst' kind of vibe and allowing you to see that wonderfully tiger-striped maple.

There's some sinkage on the back, which reveals some of the mahogany's grain, and while we can't be sure that every example will be the same, at over two grand you may well want it glossed and perfectly flat. It's a matter of opinion - we'd rather it like this than too thick and sticky.

The cream body binding is tidy, shaped and finished to the 'correct' thin style around cutaway. All in, it doesn't feel absolutely razor-sharp flawless as a modern production PRS, Collings does - or even some Schecters and ESPs for that matter - but you can make an argument that this is what we call character.

The Appetite's one-piece, quarter-sawn, set mahogany neck features a 17° peghead rake, just like the reissues and original 1958-60 Les Pauls, though it doesn't have the extended neck tenon that reaches into the neck pickup cavity. It's shaped to Slash's preferred slim sixties-style profile, though it's by no means a skinny puppy in a modern rock guitar sense - at the first fret it's 20.8mm deep, but fattening only to 22.6mm at the 12th.

It has a pleasant rounded feel, you'd need pretty specific tastes or overly tiny/massive hands to not get along with this beauty. The nitro lacquer feels a little slow in the palm and again, it's not a flawless job, but this is by no means any impediment to functionality.

Running down both edges of the rosewood fingerboard are cream-nibbed bindings, it's all finished very well, making it extremely playable, perhaps due in no small part to Gibson's routine use of PLEK machines in the final fret dress and set-up.

Jumbo frets and a 12-inch radius make huge bends effortless which, for the first time in this reviewer's experience of the new Les Pauls, doesn't cause any tuning issues. The Corian nut is well cut and lubricated, the Kluson-style tuners tight and the Tone Pros locking bridge and Gibson tailpiece rock solid: good job Gibson on the playability front.

The pickups are a pair of Seymour Duncan Slash Alnico Pro II humbuckers. Slash says he's been using these for years - they're medium output, warm sounding, vintage-style PAF-alikes, which have a softer attack than equivalent Alnico V magnet pickups. With black and cream zebra bobbins (in the same colour orientation just like Slash's guitar) they're left coverless which, aside from looking cool, tends to make for slightly more breath and presence in the pickup compared with covered versions of the same spec.

These signature models have the long-legged bottom plate, wooden spacer and single-conductor cable, which is different from the regular Seymour Duncan Alnico II Pro humbucker. SD says they're wound just a little hotter, too. They're wired to 300k volume pots and 500k tones in the usual, modern Gibson manner, and finished with lovely amber top hat-style knobs.

Finishing things off is Slash's 'R&FnR' (we'll let you work that one out…) doodle on the headstock facing, which also appears printed on the included Gibson form-fit case… with white faux-fur lining. Sassy.

There's plenty of differing opinion on what constitutes a 'good' sounding Les Paul, but we'd say start here. Alternating between traditional Fender and Marshall-style amps, the Appetite displays a core solidity and fundamental punch that will out-power lighter sounding Reissues, but without the overriding mid-range dominance and unresponsive controls of certain later (often physically heavier and ceramic magnet pickup-loaded) Standards.

The flutey neck pickup is all there - Slash's trademark evolution of Clapton's woman tone, you might say, with all its glorious enveloping girth that you can hear throughout his career, not least in the intro to Crucify The Dead on his latest album.

In fact, played through Fender-style amps, the neck can overpower the initially weaker sounding bridge pickup, though things even out considerably as you add drive and mid-range via a distortion pedal.

Plug in to a classic Marshall-style amp and much of that extra Fender-type bottom end is gone, focusing the Appetite in the harder rock frequencies where Slash spends his time.

There's enough bite from the bridge to get a real edge for high-gain leads, but it remains a warm guitar compared with the rasp of a high-power ceramic magnet 'bucker which can make Marshall Plexis - and JCM800s for that matter - sound harsh. Get the gain from the amp and pedals, not all from the pickup, is Slash's mantra and we'd say that's a good formula for anything sub-metal in the tone stakes.

The middle position offers its usual combination of slightly more hollow sounds, though you can of course manipulate the volume pots to get lots of very toneful combinations; just a touch of neck pickup mixed with belting bridge, for example.

And on that subject, these pickups clean up very nicely indeed with low and medium gain settings, though if it were our guitar, we'd still replace the 300k volume pots with 500k to extract just a smidge more high end. All in all though, a very satisfying sounding LP for anything from blues to hard rock.

Okay, the numbers are limited, so the Appetite Les Paul continues a trend in high-end instruments that have an aura of collectability from day one. Initially we thought this would mean they'd be unlikely to see much serious playing action in order to preserve their condition and value and, as such, the guitar's commodity value might outstrip its worth as a musical instrument.

But as Gibson intends (as we were informed) to double the initial run, perhaps the Appetite will be less a collectors-only guitar. We'd certainly recommend you get it belting through a suitable high-end amp - you'll be rewarded with a responsive, versatile Les Paul that befits the legacy of modern rock's Number One son.

The lightweight construction, Seymour Duncan pickups, Tone Pros hardware and excellent set-up make for a super sounding and playing guitar. For gawd's sake don't just leave it in the case for your kids to abuse in 20 years' time. Don't stash the Slash - thrash the Slash!