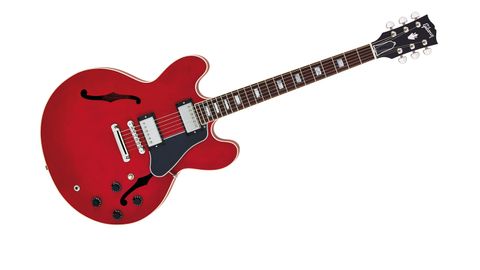 At this price, we'd ignore the more expensive gloss version - it's simply a killer-sounding contemporary ES-335 with classic looks.

Home of the thinline semi-acoustic and hollowbody instruments that will always rank among the company's most desirable electrics, the Gibson Memphis factory has a number of new launches for 2015, including this fine satin-finished semi, which takes its styling cues from the block-inlay ES-335 introduced in mid-1962 but incorporates a range of upgrades with the modern player in mind.

You'll find no zero fret brass nuts or faux-handwritten headstock logos here. Although Gibson Memphis has equipped this instrument with an f-hole logo'd truss rod cover for the 2015 model year - a logo that doesn't appear on more period-specific vintage reissues - it's a subtle motif that's barely visible from a distance.

This trend continues throughout a range of thoughtful updates, starting at the bridge. The traditional Gibson Tune-o-matic bridge and stud tailpiece arrangement has always been worryingly mobile when not held under tension during string changes, so the decision to replace this with a locking tailpiece and TonePros AVR-II bridge gets our vote.

Not only do the new parts look vintage-authentic enough from afar to appease traditionalists, aside from the practical benefits of having your optimal setup locked down (less rattle, less tweaking required after string changes), there's also more travel on the AVR- II's saddles, allowing for more adjustment range should you need it.

Towards the other end of the strings, a bone nut offers improved durability over synthetic options and some will even profess to hear tonal differences, too. It's certainly true that the guitar exhibits less of the almost banjo-like 'plunkiness' that characterises the acoustic tonality of even the finest vintage ES-335s.

The instrument is finished in a satin cherry-coloured lacquer - the official spec describes the ES-335's finish as 'Faded Cherry' - which is visually very one-dimensional, to the extent that the top of the guitar almost appears to be flat rather than arched.

Though the finish will burnish in certain contact areas over time, the temptation to give this guitar the T-Cut treatment in order to give it more of a vintage-style VOS look is considerable, and it would be entirely in keeping with the early-60s aesthetic.

Gibson has opted for a medium-output Burstbucker 1 (neck) and Burstbucker 2 (bridge) pickup with Alnico II magnets and unmatched bobbin windings in pursuit of the high-end detail offered by the better vintage PAF humbuckers.

In addition, while a fairly standard 0.022uF capacitor is retained for the bridge pickup, the neck pickup's tone control uses a 0.015uF that, in theory, should mean slightly less of the highs are cut as the control is reduced.

Mind you, the +/- 20 per cent tolerance rating of the 500k CTS pots means that any of the pots could be between 400 and 600k in practice, which could certainly have tonal consequences: one guitar may sound noticeably brighter or darker than the next so, as ever, we'd always suggest playing a bunch of these guitars in the flesh and buying the one that you like the best.

The effect of the light rolling to the fingerboard edges is subtle but pleasing, helping the guitar have a comfortable familiarity that allows you to concentrate on the important matter at hand: making music.

The fretwork and binding is neat and smooth - it's not laser-precise and there are a few stray file marks on the higher reaches of the fingerboards, but there's no aspect of the finishing that would deter us from parting with our readies.

'57 Classics were long the pickup of choice on modern Gibson semis, and while they are by no means bad-sounding units, we're much more impressed by the Burstbuckers here; in general, there's much more air and clarity in the treble frequencies, which translates into the most expressive, musical-sounding cleans we've heard from new humbucker-loaded Gibson thinlines outside of the ranks of the Historic models.

The capacitor changes may seem subtle but we definitely hear a more svelte and less syrupy 'woman' tone when you roll either tone control back and add gain, too.

This writer has always found the proportions, strapped-on balance and upper-fret access of an ES-335 to be just about perfect. The bottom line is that there isn't a lot that you can't do with this instrument.

Both are sensitively updated, excellent- sounding and highly playable takes on one of the most versatile electric guitar designs ever conceived, providing further proof that while the activity in Gibson's Nashville factory continues to dominate the headlines, the Memphis arm of the company is carrying on quietly with the business of making wonderful electric guitars for touring professionals and discerning amateurs alike.