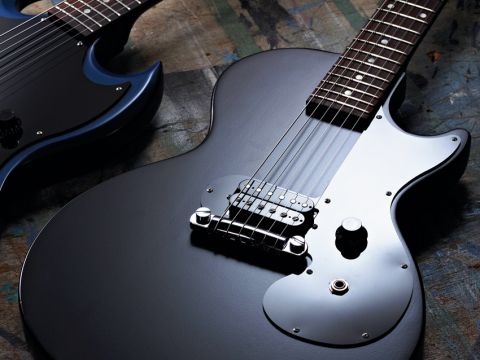 Our heads say no, our hearts say yes. Only you can decide which one rules…

The 'big two' companies arguably dominate both the guitar market and the airwaves with unprecedented levels of saturation. But while Fender is expert at making sure there's a 'proper' Stratocaster for every pocket, Gibson's efforts at making its classic outlines affordable for everyone have so far been less effective.

Sure, you can pick up a Les Paul or SG from Gibson's Chinese-made Epiphone range for reasonable money, but it's the idea of owning a USA-made guitar with 'Gibson' on the headstock that possesses as much allure today as it ever has.

No amount of fanfared hi-tech misadventure or reports of poor quality control seem to be capable of causing anything more than minor dings in the lustrous gloss of the brand's heritage and desirability.

In light of all this, when the new Melody Maker series was ushered in at the Frankfurt Musikmesse in March, it seemed like an inevitable success story given the instruments' sub-£500 pricing.

Of course, this isn't the first time that Gibson has manufactured Melody Makers in the USA and marketed them squarely at the affordable end of the spectrum.

Back in December 2008, we got our hands on the vintage- style Melody Maker that was priced at less than £300 for a solid mahogany, USA-made affair with one single-coil pickup, scratchplate-mounted volume and tone controls and a satin finish. At the time of writing, this model is still in production, although prices have inevitably crept closer to the £400 mark.

Of course, the Melody Maker name has plenty of heritage of its own. Production began in 1959, when Gibson was struggling to shift Les Paul Standards but making great inroads by selling 'student' instruments to youngsters having music lessons in retail stores.

Following the single and double-cutaway Juniors, the original Melody Maker was introduced with a single-coil pickup, a thinner body and a narrower headstock than its siblings, and was priced at just $99.50 way back then.

It may have been a cut-price design, but lest we forget that Gibsons of this period were all made to a very high standard from the kind of materials that today demand a massive premium. A Brazilian rosewood fretboard on a 'student' guitar? You bet.

Fast-forward to 2011 and Gibson's newest Melody Makers obviously aren't hand-crafted from premium tonewoods. Indeed, they don't even share many common materials with the majority of the solidbodies in the Gibson range. The

The process of torrefaction is a high-temperature treatment that makes the wood more waterproof, stable and durable. It's also totally sustainable and the material takes on a richer hue as a result.

In this instance, it has the obvious aesthetic advantage of making maple resemble the rosewood 'board that you'd expect to see on a Gibson electric.

We did wonder if the fretboards on these Melody Makers had been stained but a cheeky scratch didn't seem to betray any signs of pigment being worn away.

Although the single-cutaway Les Paul and SG outlines here have both graced Melody Maker designs in the past - the former from 1959-61 and the latter from 1966 until the model was discontinued in 1971 - the more flamboyant among you should check out the Seymour Duncan HB-103-loaded Explorer and Flying V versions.

Appointments are otherwise identical, although we'd expect the different body shapes to have a subtle impact on the instruments' tonal properties in the usual way, with the V in particular likely to boast a slightly more 'scooped' tonality thanks to a lack of body mass behind the bridge.

Back to the guitars here, and if you're wondering whether or not any corners cut in the manufacturing process will be visually evident then the answer is a resounding 'yes'.

The combination of minimal grain filling and a crude satin nitro-cellulose finish straight off the spray gun has left plenty of visible sinkage on the Les Paul's body, while the SG fares slightly better - a good thing given that more grain is visible through its satin blue paintjob.

Both guitars have what Gibson describes as a "unique Melody Maker neck profile", and although neither is the most even carve in the world, both are satisfyingly chubby and substantial palmfuls, with which we feel immediately at home.

Neither PLEK-cut Corian nut gives us any cause for complaint, but the fret jobs on both unbound necks are disappointing compared to other instruments in this price bracket, USA-made or not.

Both guitars have sharp fret ends above the 12th fret on the treble and bass sides, suggesting that this is another area in which the need to keep manufacturing costs down has impacted on the end product.

Both scratchplates have pretty sharp edges, too. It's less of a problem on the Les Paul, but the edge of the SG's larger pickguard - which also means that the whole bridge has to come off for access to the wiring - sits within the playing arc and it's all too easy to skin your knuckles on the way down towards the strings, especially if you're the type of player who flails at their instrument with any kind of abandon.

On both guitars there's a significant hazard on the way back up towards the strings, as well - the Fender-style volume control position is handy for volume swells but the knobs do stand dangerously proud of each guitar's top, so beware if you're a windmiller.

Electric guitars don't come much simpler than this. Both the Les Paul and SG Melody Maker feature a solitary ceramic-loaded 491T humbucker wired to a single volume control. And that's it.

As a result, manipulation of the guitar's volume and picking hand position and intensity suddenly become your principle tone-shaping tools. It's a scary ride, but it sure is exhilarating.

Both guitars have a strident, resonant acoustic voice which, in combination with a pickup that has bags of output and attitude, makes for a wonderful, snarling rock 'n' roll machine.

There's more top end than you'd expect to get from a traditionally appointed Les Paul or SG Standard, but this is no bad thing.

Played through a quality valve combo revved up to AC/ DC-style levels of grind, it's hard to keep the grin off our faces with either guitar strapped on. Rolling back the volume cleans things up without proceedings getting too woolly - the bite of a ceramic magnet coming in handy - although obviously you shouldn't expect much mileage for jazz and country.

These guitars might appear to be strictly rock machines but we managed to coax everything from Revolver-era Beatles to GN'R rhythm sounds out of them; mighty impressive for a single-pickup instrument. Bluesmen take note, too - these are great slide guitars.

Any differences between the sonic performances of the two instruments are negligible - we put this down to the loud pickup and the fact that although they're different shapes, they're the same weight - so if you like what you hear, the choice is an ergonomic one. Oh, and colour of course. We'd like a white SG, please.

Congratulations, Gibson, you've left us mightily confused this time. How can two guitars that exhibit so much evidence of sloppiness in the manufacturing process and that come with their fair share of practical foibles be so bloody likeable?

The answer is that it's a vibe thing. Despite some significant flaws, we'd happily take to the stage, or studio, with either of these guitars - after we'd given some attention to the frets - for any sort of vaguely rock-based gig and be confident that they'd do the business while looking great into the bargain.

An Epiphone Les Paul Standard, for instance, is undoubtedly a better guitar for the money, and it's certainly more versatile with more attention to detail on the production line.

But this, at least in skin-deep aesthetic terms and above all sonically, is a real USA Gibson. Snobs? Us? We're just guitar players…