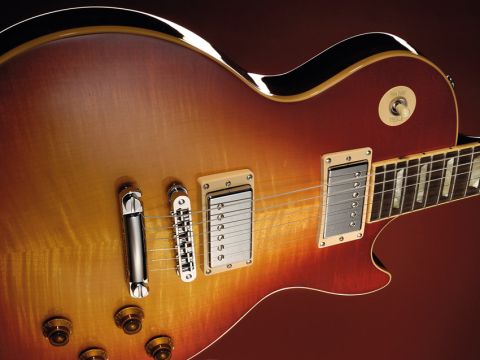 With its added features the 2008 Standard moves into a more boutique area but remains very well priced and quite old-school.

It's 50 years since Gibson unveiled the sunburst Les Paul Standard, kicking off the journey of an initially far-from-popular instrument. Now, along with Fender's Stratocaster, it's become the world's most popular and recognisable electric guitar.

Like Fender, Gibson has various historically accurate reissues available, but has also chosen in 2008 to release a new Standard. The new Standard advertises an enlarged neck tenon plus a properly chambered body to trim weight and add resonance. Time to open the case then…

The new 2008 Standard looks forward with numerous changes that would seem to be aimed to bring it in line with, most obviously, more modern brands like PRS and ESP.

Whether it's the advertised chambering of this model or simply slightly lighter mahogany, or both, the 2008 is a little lighter and seems a little more alive as you tap your knuckles on its body. Here the body back is one-piece and the maple top subtly figured. Without the pickguard it also looks a little leaner and less fussy.

Although the 'board and inlays seem dry and dirty, set-up is good (the guitar arrived with a 'Plek'd' sticker on the bridge pickup) including the nut, although we suspect opinion might be split over the tuners - one of the numerous changes to the 'standard' formula that we see here.

These are Grover locking types with chromed tulip buttons, not the more classic plastic of the traditional Klusons. The lock is achieved very easily with a large rear thumbwheel, which clamps the string in its post hole.

Like the tuners, the tune-o-matic and stud tailpiece lock to their posts. They are TonePros parts and, while the claim of increased sustain may be hard to confirm, they certainly won't fall off when you take all the strings off.

Gibson advertises an 'asymmetrical' neck profile that's quite rare, especially on production electrics - the only other one that sticks in the mind is the profile used on the original Music Man Eddie Van Halen signature.

Electronically, the 2008 has a BurstBucker Pro 1 at neck and a BurstBucker Pro 2 at the bridge and Bourne gold-plated pots visible through a smoked translucent control cover; also new is the Neutrik locking output jack tidily inset into the guitar's rim.

Remove the electrics backplate and things all looks rather high tech: the four square pots are soldered onto a Gibson logo'd PCB; the pickups connect to the PCB with clearly marked solder-less push-in connects; likewise the outputs to the toggle switch.

The 2008, while offering what seems like a slew of modern updates actually sounds older. What we mean here is that, certainly on the bridge pickup, which sounds a little hotter than a '57 Classic, we have more edge and spark to the sound; it clears up nicely too and you can really get older Les Paul voices - more classic blues (Peter Green) than modern rock (Slash), if you like.

The neck pickup is very sweet and tuneful, again though there's a little more definition to the sound but it's lower in output compared to the bridge pickup and seems less balanced as a result.

This is a set-up you might prefer, of course, but we found it a little too unbalanced before we started messing with pickup heights. The mix, however, results in increased clarity - pull down both volumes and there's more single-coil like clarity than you might expect.

Playability-wise the 2008 feels like a modern production Gibson. Those frets still feel a little intrusive initially, and while the 2008's slightly slimmer neck feel will have its fans, some players may yearn for the more familiar neck shapes available in other areas of the range.

Like Fender, Gibson's main business is providing us with umpteen versions of its classic guitars: they may be historically accurate or signature versions or look a little to the future, as with the 2008.

Whether the slightly edgier, older sounding 2008 Standard will suit you, is really down to what you want from a 'Paul. What we will say is that if Gibson keeps up this improved, detailed construction, a few more boutique-y other-brand single-cuts will begin to look rather costly.