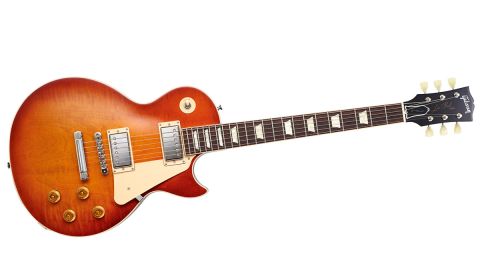 Don't blame us if you fall for its resonant, lightweight charms.

Despite its huge heritage and perception of conservative style, Gibson is actually remarkably forward-looking and innovative.

Okay, not everyone gelled with the 'robot' tuners, brass zero frets (and the like) of some recent USA production models, but that's only one part of what the brand is about.

Gibson's Memphis division, which creates the mainly laminate 'f-hole'- styles, seems to take a different slant on modernism that's typified by the recent semi-solid ES-Les Paul and the downsized ES-339: classic guitars but with a different spin.

The ES-Les Paul, of course, more usually has dual f-holes. This one doesn't, although it follows the same construction and it looks like a classic Les Paul until you pick it up and discover its wonderful light weight.

Like our other recently-reviewed Gibson guitars (the 335 Premiere and 275 Figured), it's laminate in construction, but has an emancipated centre block in solid mahogany. It's a similar finish to our ES-335, but comes with a flat dark-brown-hued back to match the sides and neck-back, and only the top is figured. Whip off the control cavity backplate and you see kerfed linings like an ES-335... as well as plenty of air!

Again, the neck follows our other models in shape and feel - though with obvious difference to the inlays - including the rolled-edge fingerboard binding, while pickup/control specs follow the ES-275. It's hugely familiar, and weight aside, it's another cracking piece.

To be fair, we weren't too sure of what the 'Memphis Les Paul' had in store. It sounds a little more restrained than the ES-335 - there's less 'solid-ness' here, a little more hollowbody with a softer, less pushy projection.

But, again, it's a chameleon: on the one hand, there's a beautiful sweet- toned jazz voice, but in contrast with a gained Marshall, it sounds wonderfully fat and fruity, resonant and superbly touch- sensitive, especially if you use fingers not a pick.

There's a little squeal from the bridge pickup in this area (we understand these MHS humbuckers aren't wax potted), but control that and it edges into pretty easy musical feedback and sustain. In some ways, it's less 'rock' than it looks and lacks that solid midrange 'chunk', but for many it would be a perfect way to get some 'hollow' or 'semi' character from a very familiar- looking and feeling piece.

Without the weight, of course. Put another way, if you've never 'got' the Les Paul thing, this one seems aimed at a player who enjoys subtle tonal shades rather than purely rock bluster.