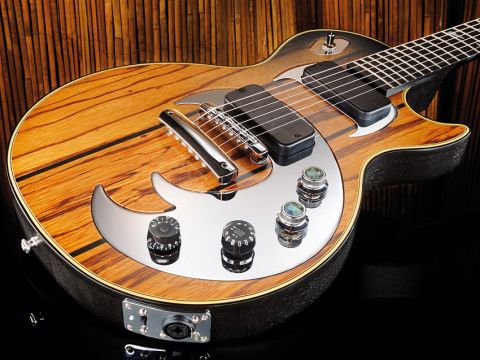 An exciting new toy for well-heeled experimentalists. The rest of us will have to wait for the technology to filter down the food chain.

These are strange times for Gibson. We write this having recently attended a NAMM show where the Big G's presence was smaller than at any time in living memory. Meanwhile, persistent rumours about the company's financial circumstances, a federal investigation into the source of its materials and that Hendrix signature guitar debacle all contributed to make 2009 a less than auspicious way to mark the 50th anniversary of the most coveted electric guitar of all time.

However, it appears that in Gibson's R&D department at least, the garden is somewhat rosier. It would be easy for a brand with such heritage to rest on its laurels, but that's never been Gibson's style.

Lest we forget, designs that today have attained iconic status, such as the Flying V and Explorer, were laughed out of retail stores five decades ago, and as far back as 1977 Gibson was forward-thinking enough to utilise Moog electronics in its RD series guitars.

Gibson isn't a brand that's afraid to fall flat on its face in the name of innovation and it should be remembered that the history of the electric guitar is peppered with products that only became revered when used in a way that was utterly contrary to the purpose for which they were intended. The Fender Bassman ended up being a hell of a guitar amplifier, didn't it?

Back to 2010 then - the Dusk Tiger represents Gibson's fourth crack at a super-guitar in recent times, following the HD.6X-Pro Digital Guitar, the Robot Guitar and the Dark Fire. Billed as the "Next Generation Of Robot Technologies", the Dusk Tiger combines and refines many of its predecessors' features and, as a result, it's claimed to be "more like a live guitar" and "made to be easy and intuitive onstage".

Before we look at the electronics, it has to be said that the Dusk Tiger's appearance has been the subject of a great deal of negativity. The combination of marblewood top, chrome-plated bling and tigerstripe back does look considerably better in the flesh, but there's still a sense that, visually at least, this is an instrument best enjoyed in combination with silk pyjamas and a velvet smoking jacket.

Also, for a guitar that's priced close to £3000, we'd expect better attention to detail in the manufacturing process. The mirror-like chrome scratchplate on which the control knobs reside has been cut a little too small for its rout in the flat marblewood top, resulting in a flush fit on the treble side, but an unsightly 2mm gap on the opposite edge.

That said, strummed acoustically, the guitar is bright and resonant, with the chambered mahogany body adding more air than the guitar's Les Paul outline might lead you to expect. The Tiger's silky thin nitro-cellulose finish allows you to see and feel some of the grain, contributing to a more organic-feeling instrument than its futuristic specifications might suggest.

The key to uncaging the Tiger's potential is the redesigned Master Control Knob - the MCK II - which aims to address some of the usability issues that hobbled the Dark Fire. Assuming the Dusk Tiger's camera-style Lithium-ion battery is charged, power up and pull out the MCK II and the guitar will enter Tune Mode. Blue centre LEDs indicate which of the 11 tuning presets is currently accessed. Simply strum all of the open strings until each of the outer MCK LEDs turns green and, in theory, you're good to go.

Each iteration of the Robot Tuning technology seems quicker and more precise, but while impressive, don't expect 100 percent accuracy every time. Fine adjustments to one or two of the strings are frequently required and until you learn that the bass-side machineheads operate backwards when compared to a conventional set, it's possible to spend more time tweaking the thing than it would take us to change from standard to open D by ear on a guitar equipped with a traditional set of tuners.

Once the guitar thinks that it's in tune, the centre LEDs glow green, the guitar roars into life and you're in Sound Select mode. Straight out of the box, 10 presets give you access to approximations of various Gibson icons from a PAF-loaded '58 Les Paul to a P-90 toting '55, a Gibson acoustic and various Fender-flavoured 'Twangy' and 'Funky' settings. It's worth noting that these aren't digital models as you'd find on a Variax; Gibson created these sounds with a combination of parametric EQ, the onboard piezo and magnetic pickups.

As always, how accurate these sounds are is subjective, and the guitar's 12-inch fingerboard radius and 24.6-inch scale length will feel alien to Fender players exploring the guitar's single-coil voices. Specifically, you don't get the associated snappy feel of higher-tension strings, but that doesn't mean you can't work with it to find sounds and a feel unique to the Dusk Tiger.

Yet while you can't change the physical dimensions of the instrument, Gibson's Chameleon tone-editing software allows deep access to its sounds. You can sculpt a tone in terms of EQ, pickup selection, phase, coil-split and piezo blend, design a tuning to go with it and save the whole thing in one of the user preset slots for on-the-fly access.

The thorn in the Tiger's paw here is that, despite the guitar being available from retailers at the time of writing, a full manual has yet to be published. This resulted in us having to consult an internet forum to find out how to access the yellow user preset banks! In addition, the MCK II's operation, while a step-up from the Dark Fire, is still fiddly. For live use, we'd prefer a more comprehensive display on the guitar's upper shoulder edge that's easier to navigate and reference at a glance.

That said, for those brave enough to take a laptop onstage, the Dusk Tiger has ferocious potential. On top of a standard mono output, in combination with the supplied RIP FireWire audio interface, there are seven additional, simultaneous channels available: one for each of the guitar's six strings and another from the piezo.

Given that any modern digital multitrack software will allow you to apply a different set of effects and EQ to each channel, and position it in a different part of the stereo image, place this in the hands of a Nick Zinner or Kevin Shields-style sonic architect and the results could be earth-shattering.

In open tunings, it doesn't take long to make the Dusk Tiger sound like two entirely different guitars being played concurrently. Simply pan the strings from left to right across the stereo image, add drive to the bass strings and keep the treble strings clean and acoustic-sounding. You can play a gentle acoustic part with a dark fuzzy underbelly all at once, then sack the rhythm guitarist and have an extra seat for groupies on the tourbus. Check out our walkthrough for more.

In many ways, this is the 'eureka' moment with the Dusk Tiger. Playing it through a regular guitar amp it's all too easy to be underwhelmed and even annoyed by the slightly temperamental operation and occasional extraneous noise of the MCK. Yet, in the digital domain, the ability to design tunings and sounds in Chameleon Tone, sync them onto the guitar and then create utterly original soundscapes limited only by the complement of plug-ins available to you is truly inspiring.

As there are only 1,000 Dusk Tigers being manufactured, it's already an endangered species, so conjecture about mass appeal is academic. Having tested the water with a limited edition run, we'd like to see Gibson make the Robot Tuning, additional electronic gubbins and editing software available as options on more traditional production models.

While you're at it, Mr Gibson, please replace the MCK with more live-friendly controls. Until then, despite Gibson's assertions, this is anything but "easy and intuitive" to use onstage. But if you're tech-savvy with an experimental mindset and are prepared to put in the hours required in order to tap into the potential on offer, you might be able to overlook its idiosyncrasies.