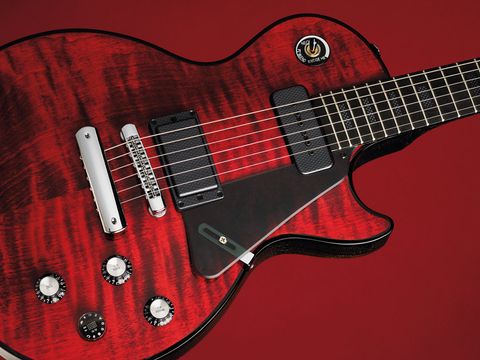 When Gibson gets all the elements in place and working correctly this should be a truly amazing instrument, but it will still remain fiddly to use.

Gibson has been making game attempts at pushing the envelope in the last couple of years with the self-tuning Robot guitar and the HD.6-X Pro Digital Guitar with its computer connectivity.

Those two strands of technology, plus some new tonal capabilities, have now been incorporated into the new Dark Fire, which the company, perhaps quite rightly, is calling "the world's most powerful analogue and digital guitar."

All the new technology is incorporated into what is undeniably a Les Paul, albeit one with a stunning dark red maple top plus some other slight cosmetic changes and a white fitted case to mark its limited edition status.

For a good overview of what the Dark Fire can do, Guitarist's Simon Bradley presents this video walk-through of the instrument's main features:

We get a P-90H in the neck position and a Burstbucker 3 at the bridge, chosen to give the guitar the widest range of tones available when partnered with the onboard Chameleon Tone technology - a switching matrix that offers various combinations of the two pickup's coils (series/parallel, phase, north coil, south coil), along with eight different four-band Parametric EQ curves.

On top of that there's more tonal variety from the piezo pickup in the bridge, which can be used independently or blended in by the use of the central stem of the pickup selector switch - ingeniously engineered as a mini knob by Gibson but still nowhere near as clever as the single knob that controls all of the guitars other hi-tech functions.

The Robot Interface Pack (RIP) should come supplied with the Dark Fire. It is a package of software and hardware that is designed to integrate the Dark Fire into a complete computer-based recording system.

The hardware element is a FireWire-connected audio interface for getting all available Dark Fire signals into a computer. It has the standard headphone and line outputs but also a hexaphonic output that carries the outputs of each string and a composite piezo output.

An optional adaptor provides connection from this hex output to MIDI guitar interfaces such as those made by Roland, or enables you to divide out the six individual signals to their own balanced 6.4mm connectors.

Software in the package includes Ableton Live Lite 7 Gibson Studio Edition and Native Instruments Guitar Rig 3, plus Gibson's own software for the Dark Fire with drivers and a virtual mixing console for levels and routing of the magnetic and piezo pickup sounds and of the individual strings.

Dark Fire owners will also be able to connect to the internet through their RIPs (or a projected Bluetooth option) to download firmware updates, along with upgraded functions and software features.

That is the Master Control Knob (MCK) in the position of the bridge pickup's tone control (and it actually carries out that role when not being used for its other functions).

The MCK is, in fact, an ultra-sophisticated pull/push knob with a multi-coloured illuminated display when pulled out. It can be twisted to one of 11 positions and addresses various functions with light, short or long presses on it.

The MCK calls up the various preset Chameleon tones and initiates the self-tuning mechanisms. Dark Fire is fitted with second-generation Robot Guitar tuning technology with motorised machineheads (Powerheads) and is equipped with 18 tuning presets, in three banks of six, ranging from standard tuning through all the popular open tunings down to extreme lowered tunings such as B baritone.

One pull on the MCK and a couple of strums on the strings will always put the guitar back in standard tuning but the others are accessed easily. If the preset tunings are not what you need you can also store your own, including subtle 'sweetened' standard tunings.

There is also the facility to store a Chameleon tone and an altered tuning together as a 'sound' in one memory position so that they can be called up together for, say, a particular song in the set.

The Dark Fire runs from an onboard battery that, when fully charged, is good for 500 tuning operations. The battery is charged via a stereo jack lead from a wall wart-powered plastic box that can be kept in line while you play so you won't have to worry about flat batteries.

The third high-tech aspect of the Dark Fire is its computer connection, courtesy of the Robot Interface Pack, comprising an interface box and its associated software that, unfortunately, Gibson had not released in time for this review.

Disregarding all the electronic gubbins for a moment, we have to say that the Dark Fire is a pleasing enough guitar to play.

Not everyone will take to the matt finish on the back of the neck, and some of the fret ends were a little sharp out of the box, but playability is fine and the combination of the P-90 and Burstbucker is an inspired choice that offers plenty even before getting into the realms of coil-splitting and active EQ.

The default setting of the guitar is a Chameleon tone setting known as 'Classic Gibson', which does what it says on the tin, but the MCK can call up the other seven presets, which use different coil combinations and EQ variations.

Each preset effectively re-voices the guitar somewhat like the various models on a modelling guitar, but it does it with conventional electronics so whatever 'voice' you choose can still be altered by pickup selection and the tone and volume controls.

This is probably the widest range of sounds available in a single electric guitar - without the use of modelling - and pretty versatile too, from the 'Twang' preset that evokes Fender-like tones to the 'L5' sound that paves the way for some really cool jazz.

The piezo pickup (built into the bridge and essentially there as a sensor for the tuning technology) is utilised as a faux acoustic sound, but even with the onboard EQ engaged it is not particularly convincing in that role.

However, it can add an extra element of attack when blended in with the magnetic pickups so overall can make a positive contribution to the range of sounds on offer. Hopefully more EQ options will be available in an update to make the 'acoustic' sound a little more authentic.

The tuning function works flawlessly on the Dark Fire and it's undoubtedly a great asset - not only for keeping in tune during practice, recording and gigs but also because instant switching to altered tunings may encourage musical exploration. And if you regularly use altered tunings onstage, it's a lifesaver. Most tunings need a couple of strums, particularly with the more extreme dropped tunings, but it's still all done in seconds.

So what of our criticisms? Well, pulling out the MCK sends a bang through the amp and the tuning isn't silent (although Gibson is looking at solutions and there will be ongoing firmware upgrades to improve functionality).

Our main gripe, though, is that the MCK is not user-friendly and often downright confusing - it controls too many functions for a single knob and its readout is hard to see properly from a playing position.

According to Gibson, the single knob idea was utilised so the Dark Fire looks just like a conventional Les Paul with no extra holes or switches, but shoehorning all that modern technology into a design that is essentially over half a century old has inevitably resulted in compromised ergonomics.

From a player's point of view, a small digital readout on the topside of the guitar would be preferable to the coloured graphics on the MCK and one, or more, extra rotary knobs would make life a lot easier.

Full marks to Gibson for trying to take the electric guitar a few steps up the evolutionary ladder. Without detracting too much from its use as a conventional guitar, the Dark Fire has incorporated three hugely important elements in terms of tuning, tone and computer compatibility.

Some may sniff about the instant tuning but, while it's true that beginners do need to learn to tune by ear, for experienced guitarists it's a great labour-saving device - anything that takes away the drudgery and just lets you get on with playing has to be a good thing.

Likewise, providing more tonal options, even if you don't use them all, is desirable. And if the RIP string separation works via FireWire, the Dark Fire is going to be in demand for creating new sounds in computer-based recording.

Gibson has given us the Dark Fire to look at before it is truly ready and are working hard to get all the elements in place for the full package. We have here an instrument of massive potential, but it's not quite there yet.