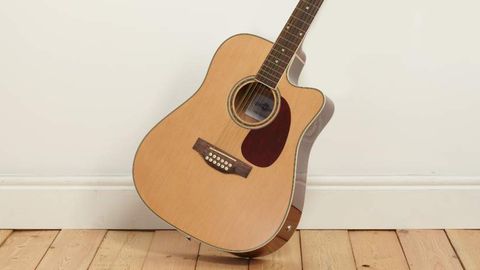 This is a decent sounding and playing instrument. You'll need to give some attention to the setup and frets, but the Gear4Music dreadnought 12-string electro-acoustic still provides excellent value for money.

Spend enough time with an acoustic guitar and chances are at some point you'll be tempted to make the leap from six strings to something more unconventional.

A 12-string's chorus-laden jangle and room-filling ambience are a fantastic addition to any guitarist's arsenal, but with all the gear available to buy out there, something like a 12-string is often low down on the shopping list. All of which makes Gear4Music's sub-£100 12-string electro-acoustic guitar decidedly intriguing...

That intrigue is tempered with a healthy hit of scepticism, however: what corners have been cut to achieve this amazing price? A quick glance down the spec list gives nothing away.

You'd expect an all-laminate construction for this price, but amazingly the top is a solid slab of spruce. It's partnered with laminate sapele back and sides, a nato neck and rosewood fingerboard. Combine that with an active preamp for electro-acoustic functionality and you've got the makings of what could be the bargain of the century.

Take your first strum of the guitar and the benefit of the solid top is immediately apparent. There's a subtle enhancement and depth to the tones that you just don't get from an all-laminate guitar, and in theory this 12-string's tone should improve over time as the wood settles and breathes. Intonation is reasonably good up and down the fingerboard, but does start to go out a little as you near the higher frets.

String balance is very good. The notes of even the biggest chords sing out with impressive clarity for such an inexpensive instrument. With more strings comes more opportunity for the sound to become muddy and indistinct, but thankfully that doesn't seem to be the case here.

Unfortunately, all is not rosy in the acoustic garden. The guitar has taken a real hit in the setup and the poorly finished frets, which are prone to scratchy excess noise from the slightest movement.

You could pay out some extra cash for a fret dressing, of course. You'd still be well under the asking price of most 12-strings, but for not too much more dosh you could get yourself some of the big names: Fender, for one.

Plugged in, the 12-string tones continue to impress and the preamp puts in a reasonable performance. The sound can be artificial at times, but this electro is still perfectly functional for home recording and live performance. The only thing missing here is a tuner. It would have come in especially handy with all those extra strings to consider.

Whether you're an experienced guitarist looking to expand your musical horizons on a budget, or a beginner who wants to start with something a little off the beaten track, you're in safe hands here. You will need to supply your own tuner, and you'll probably want to sort out those frets straight away, but Gear4Music's dreadnought 12-string electro is a solid instrument that packs in some serious value for the price.