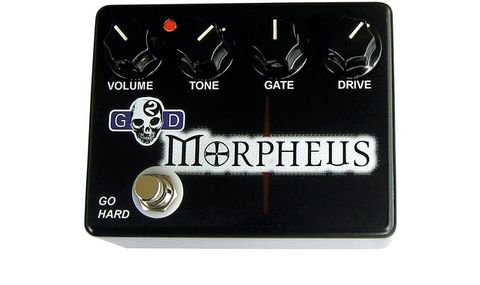 Decent, if a little overpriced, distortion from Down Under if you don't mind a three-inch-tall pedal.

New Zealand pedal manufacturer G2D describes the Morpheus Distortion as "a hard out distortion pedal not for the faint-hearted", reminding you that what you're getting is a distortion stompbox that has been designed with metal guitarists in mind.

A four-knob pedal that runs off a battery or a power supply from nine to 18 volts, the Morpheus has standard volume, tone and drive controls, but also features a noise gate. To get rid of any hiss you simply turn the knob clockwise until it disappears - operation is not at all intrusive at the threshold and you won't cut off the tails of any notes.

You can, though, turn the knob further if you really want it to clamp down hard so you can use it for really tight rhythm playing or as a percussive effect at the start of notes.

There's loads of rich distortion available here, spanning a range not dissimilar to a Pro Co RAT and all delivered via a tone control that runs from dark and weighty through to letting you emphasise the upper frequency area where your sound will best cut through.

Okay, it's promoted as a metal or hard rock pedal and succeeds admirably in that role, but strip the macho branding away and what you've really got is a distortion pedal that delivers a very nice flavour of grit that could also suit several other genres of music.