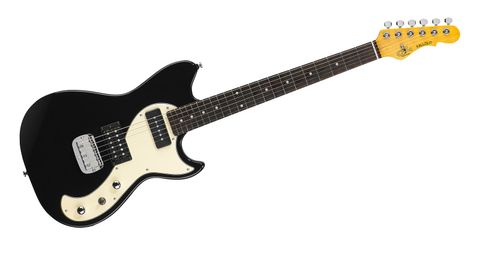 A super-freak with Leo Fender's fingerprints on it; don't let it fade into obscurity again.

The Tribute Fallout is based on G&L's SC-2, which was introduced in 1983 and used by the likes of Mark and Bob Mothersbaugh from New Wave kings Devo. Appropriately, it's a bit of an oddball.

It has the same shape as the Leo Fender-designed SC-2, which is to say it's a little like a Jazzmaster with better posture, and has a thin, contoured mahogany body, onto which the same C-shaped neck as its Tribute siblings is bolted.

With a humbucker in the bridge - again, tapped via popping the coil-tap in the treble pot - and a P-90 in the neck, the Fallout is a weird hybrid, like a victory lap for all of G&L's best ideas.

And, of course, such a guitar would not be complete without a G&L Saddle Lock bridge - a formidable piece of hardware, tightened by side-locking screws, designed to keep strings resonating and improve sustain.

There's no disputing it; the Fallout is one cool guitar. It looks cool and it sounds cool. Whether you're playing scratchy garage rock and need some angular skronk, or practising 24/7 till you master Television's Marquee Moon, the Fallout is for you.

Or maybe you're an individualist who wants a super-playable guitar that can deliver a comprehensive gamut of tones, from powerful, muscular rock through bright jangle and sparkling cleans - and who doesn't want that? Again, the Fallout is for you.